Christian Eriksen ended Ireland’s World Cup ambitions with a match-winning hat-trick as Denmark coasted to qualification with a comprehensive victory over Ireland at the Aviva Stadium.

Ireland enjoyed the perfect start to this World Cup play-off second leg as Shane Duffy rose majestically to head the ball home in the sixth minute.

However, two goals within three minutes put Denmark in control of the game as Andreas Christensen and the aforementioned Spurs midfielder struck in the 29th and 32nd minutes.

Three further second-half strikes sealed the victory for the visitors as Eriksen banged home a brace with either foot as Ireland capitulated, before Nicklas Bendtner smashed home a last-minute penalty.

As early as the second minute, Denmark resumed where they left off in Copenhagen, exerting immediate pressure on the Ireland final third, Eriksen eventually drawing a foul from Robbie Brady.

The resulting free-kick was whipped into the box and a deflected Meyler header made sure that Randolph was alert to the situation.

The referee was whistle happy throughout those opening exchanges attempting to stamp his authority on the game following some full-blooded challenges.

And sure enough the opening goal arrived courtesy of a free-kick awarded to Ireland following a foul in the middle of the park.

Robbie Brady launched the resulting set-piece in the general direction of the assembled mass of bodies in and around the penalty spot.

Denmark’s Nicolai Jorgensen was back defending but the striker opted to throw a boot at the dropping ball and only managed to slice it back up into the air.

Cue Shane Duffy. The Derry man mountain easily edged his marked out of harm’s way before lunging forward at the ball and getting a great header over the outstretched arm of the arriving Kasper Schmeichel.

Duffy’s leap of faith made even more impressive by the Michael Jordan-esque hang time that he managed as he opened the scoring for Ireland.

The ever-willing Jens Larsen attempted to hit the ball first time at the back post but his connection was weak and Ireland survived.

Thomas Delaney’s 18th-minute effort was rifled towards the bottom corner but Randolph got down well to his right to turn the ball around the post, before thwarting the influential Pione Sisto, who smashed his half-volley straight at the keeper.

An Ireland counter-attack eased the pressure in the 20th minute, as Robbie Brady, James McClean and Daryl Murphy piled forward, aided by the arriving Christie.

And Ireland kept the foot on the pedal in the opposition end and Christie again stayed forward; this time dispossessing Sisto before curling a most delightful ball across the face of the goal.

Murphy was the only option and the Nottingham Forest striker showed his quality as he caressed the ball goalwards, first time with the outside of his left foot.

Schmeichel was lunging towards the top corner but was never getting there; luckily for the Danish stopper, the ball just crept past the upright into the side-netting.

Two minutes later, Ireland were again in on goal as McClean just beat the off-side trap to race in from the left with just the keeper to beat.

The angle narrowing with every step, McClean went for power as he smashed it low and hard across the face of the goal, but the ball skidded wide and Denmark remained very much in the tie.

The visitors pulled themselves right back into the tie following some fine work from Sisto in the 29th minute, again looking dangerous coming in from the left flank.

This time, the Celta Vigo man turned Harry Arter inside out with a textbook nutmeg, before opting to square the ball across the six-yard line. The ball beat everyone, allowing Chelsea’s Christensen to pounce at the back post.

His half-hit effort hopped back off the post and took a fortuitous ricochet off the out-stretched leg of Christie before nestling in the back of the net.

The Denmark travelling contingent rejoiced behind the Havelock Square End of the stadium and three minutes later they were near ecstatic as Eriksen’s looping effort crashed off the underside of the bar and into the back of the goal, Randolph unable to get near the delightful effort.

Disappointingly for Ireland, it all came off the back of an Irish foray forward.

Ward and Brady exchanged passes on the left flank before the former tried to clip the ball past the arriving Poulsen.

But the RB Leipzig forward gained good purchase on the ball, which set him in motion into acres of unmanned territory behind the advanced Ward.

Ireland’s entire defence were caught up the pitch as a result and two incisive passes inside were all it took to find the gifted right foot of Eriksen who guided the ball home.

A shell-shocked Ireland suddenly found themselves needing two goals to get to Russia.

It took them a while to regroup before they could even attempt to get one back.

A brief flurry of action in the Danish half ended the first 45 but the visitors were in total control as the sides went in at the break.

Two changes to the Ireland side appeared for the second half as Aiden McGeady and Wes Hoolahan were brought on instead of David Meyler and Harry Arter.

The manager had sacrificed his entire defensive midfield, knowing it was do or die.

But Denmark kept on the offensive and looked to kill the game, thinking one more goal would certainly put the result beyond the Irish.

A frenzied few minutes followed as the game ping-ponged up and down the pitch with chances arriving at either end.

First a Duffy header was denied by Schmeichel, before Eriksen broke free and smashed a low left-footed effort at Randolph, who saved well, and then Christie weaved his way into the box and drilled the ball across the goal, which the keeper again parried away. 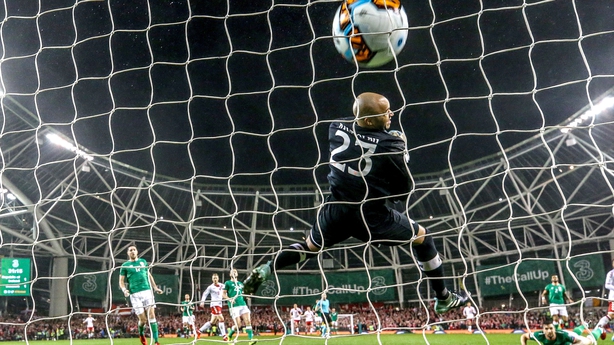 But then in the 63rd minute, Eriksen stamped Denmark’s passage to the World Cup with a delightful, curling effort into the back of the net.

The Danes had calmed things down with some simple, yet effective passing across the midfield and moments later, Sisto fed Eriksen on the edge of the box and the Spurs man picked his spot and sent the travelling Danes behind the goal into party mode.

McClean had a chance in the 66th minute but headed over the bar, but that was as close as Ireland came before Eriksen bagged the match-ball following yet another Irish mistake.

A simple ball into the box was mis-timed by Ward and Eriksen was waiting to smash the ball home.

To rub salt into the already gaping Irish wounds, Danish sub Nicklas Bendtner won and then converted a penalty, smashing the ball into the roof of the net on the stroke of full-time.

The Danes had the victory t-shirts waiting in the wings and their pre-match confidence more than vindicated as they look forward to next summer.

Ireland will need to take a look inwards. 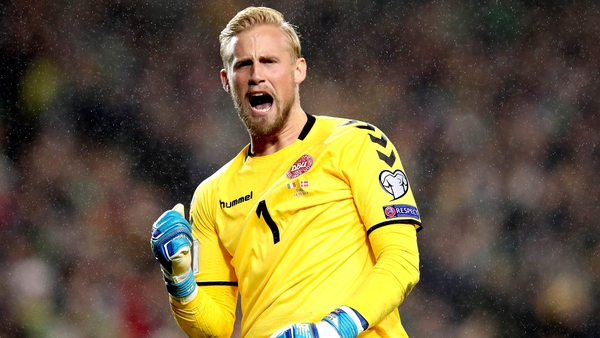 Schmeichel: 'I'm gutted for the Irish'