First game on RTÉ is on Saturday 8 June, where Norway take on Nigeria, 7.30pm. 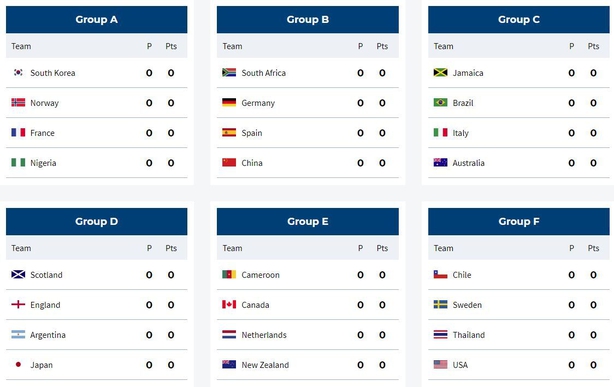 It's almost time. 24 countries all converging on France vying to become champions of the world.

The opening ceremony of the Women's World Cup takes place tomorrow along with the opening clash in Group A, where tournament hosts France will take on South Korea.

This is the eighth edition of the tournament and it will be a historic one for Irish audiences, who will be able to watch all 52 games live on free-to-air television.

RTÉ and TG4 have teamed up to bring the World Cup games to Irish homes, with RTÉ broadcasting 23 matches including three of the quarter-finals, one semi-final and the final on Sunday, 7 July. TG4 will be covering 29 games in total.

The Republic of Ireland miss out, but there's still plenty to look forward to at the 2019 Women's World Cup.

The United states are three-time winners of the World Cup and as the world number one ranked side, they are considered strong favourites to retain their title.

They've reached all seven of the previous World Cup tournaments and have been runners-up on three occasions.

The USA boast an array of impressive talents in their squad, including Carli Lloyd who is competing in her fourth World Cup. At 36 years of age, it's likely we will see her playing more of an impact role but she's a deadly asset for USA in attack.

She previously played alongside Ireland's Megan Campbell at Manchester City when she was on loan there in 2017.

Alex Morgan is another dangerous forward for USA and is more likely to spearhead their attack. She recently scored her 100th international goal.

USA look to have secured a relatively easy draw with their first two games against Chile and Thailand, but Sweden will pose a problem in their final encounter, which is likely to decide the outcome of Group F.

One of the biggest stories preceding this World Cup concerns one of the best players in the world declining to represent her national side at the tournament. Norway's Ada Hegerberg became a hugely recognisable figure for the wrong reason at the end of last year.

On the night that she became the first winner of the female Ballon d'Or, Hegerberg found herself at the centre of a sexism scandal. After receiving the award, French DJ Martin Solveig inexplicably asked her if she how to twerk and ruined what should have been a landmark moment in the Lyon star's career.

But that's not why we won't be seeing her on our screens this summer. Hegerberg announced she was taking a break from international football in 2017, following a poor run of results at the Euros where her country lost all three of their group games.

She subsequently articulated her frustrations about the treatment of female players in Norway. In response to her protest, the Norwegian Football Federation [NFF] agreed to double the remuneration pot for women from 3.1m Norwegian crowns (€315,000) to 6m crowns.

Discussions were held with Hegerberg in an attempt to convince her to reverse her decision, but she remains steadfast in her decision to boycott the national side and will work at the women’s World Cup in France as a TV pundit instead of leading the Norwegian attack.

Norway, who won the World Cup in 1995, are in Group A alongside tournament hosts France as well as South Korea and Nigeria. Their opening game will be shown live on RTÉ this Saturday.

The USA are the front-runners in this regard but given the nature of tournament football, the script might not unfold as expected.

As tournament hosts, France will naturally be eager to emulate the success of their male counterparts who triumphed at the men's World Cup last year.

They reached the quarter-finals at the last edition in 2015 where they lost out to Germany on penalties, and previously played in the semi-finals of the 2011 tournament.

Germany are the world number two side and will be a strong candidate to upset USA's title defence.

Powered by ace midfielder Dzsenifer Marozsan, they face off against China, Spain and debutants South Africa in Group B.

Brazil have never won a World Cup or an Olympic gold medal, and with prolific striker Marta now 33, this may be the last chance for her to grab one of those elusive titles.