Leeds boss Marcelo Bielsa will instruct his players not to kick the ball out of play if an opponent is injured during their Sky Bet Championship play-off semi-final against Derby.

Bielsa plans to speak with both Derby counterpart Frank Lampard and the referee to clarify the rules following the controversy in his side's recent draw against Aston Villa, which ended in a mass melee at Elland Road.

"I'd like to make a short comment," Bielsa said at the end of his Thorp Arch press conference. "We have reached the common decision with the players, we decide to adapt 100% to the rules and we understand that if we have one player [down] we understand that we don't have to put the ball out of the pitch.

"We also think that if a player from the opposing team is down, we shouldn't interrupt the play and put the ball out.

"We all know that the person that has to take this decision is the referee.

"But we don't want to disappoint any of our fans or the fans of the other team, we think because it's what the rules say that the person that has to make the decision is the referee."

Players from both sides were involved in a brawl when Leeds refused to kick the ball out of play as Villa's Jonathan Kodjia lay injured.

Leeds midfielder Mateusz Klich went on to score and Villa's players and bench reacted furiously before Bielsa ordered his players to let the visitors walk in an uncontested goal in the 1-1 draw.

Bielsa said: "We just want to find a solution to this doubt.

"Before the game we will tell the referee and the head coach of Derby and the captain of Derby that we will behave like that.

"We think we are doing the right thing, I hope I am not wrong." 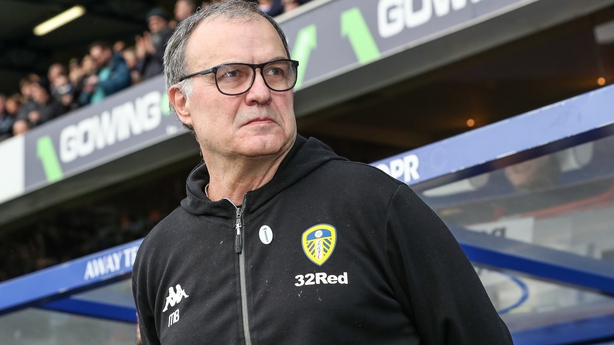 Leeds finished in third place after last week's defeat at Ipswich and will play the first leg of their play-off semi-final at sixth-placed Derby on Saturday.

Bielsa revealed centre-half Pontus Jansson is doubtful for the sell-out at Pride Park due to an ankle injury and forward Tyler Roberts remains sidelined with a similar problem.

Striker Patrick Bamford sits out the second game of his two-match ban for deceiving the referee at the end of the game against Villa and defenders Barry Douglas and Ezgjan Alioski (both knee) remain long-term absentees.

Leeds let slip their chance to win automatic promotion back to the Premier League after a 15-year exile by losing five of their last nine league games and taking just one point from their last four.

"We analysed deeply the last four games but we did that the first day of the week," Bielsa added.

"We draw the conclusions that we thought were the right ones and we start dreaming of what is coming.

"That's how we feel. We are longing to face these new opportunities that we have."