Leeds boss Marcelo Bielsa played down his decision to allow Aston Villa to score an unopposed equaliser in a contentious 1-1 draw at Elland Road.

Leeds took a 72nd-minute lead in controversial fashion through Mateusz Klich after they had refused to kick the ball out of play despite Villa forward Jonathan Kodjia lying prone in midfield.

Villa's players reacted furiously and in a mass melee that followed, defender Anwar El Ghazi was shown a straight red card by referee Stuart Attwell for swinging an elbow at Leeds striker Patrick Bamford, though the contact was minimal.

Chaos ensued as rival players and benches squared off in heated debate before Bielsa instructed his players to allow Villa to walk in an equaliser from the restart, with Albert Adomah tapping home an equaliser.

"The facts are those which everyone could see," Bielsa said.

"What happened happened and we behaved as we behaved. That's all I can say about something which is very clear."

When asked if he had instructed his players to allow Villa's equaliser in the interests of fair play or simply to help restore order, Bielsa said: "I don't understand the difference. I don't see any difference.

"What happened happened and we reacted the way we reacted. You make a difference between fair play and the circumstances of the game, but for me it's the same.

"English football is known around the world for its noble features of how we play."

Bielsa appeared angry with defender Pontus Jansson, who clearly did not agree with his manager's decision as he attempted to stop Adomah scoring. 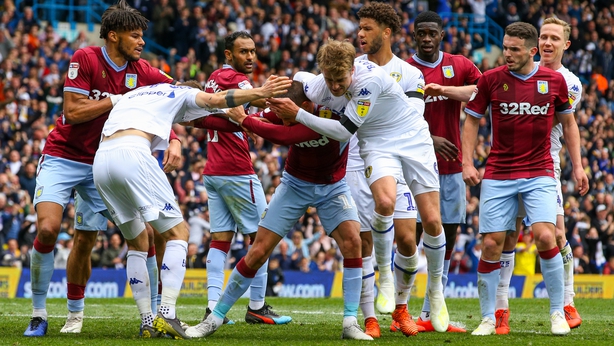 "Jansson didn't want to obey the indication I gave," Bielsa added. "That diminishes my authority and I don't know what the consequences are when you lose respect from a player."

Villa boss Dean Smith sympathised with Jansson, but said his players had put the ball out for a throw-in earlier in the game when Adam Forshaw had gone down injured.

"I can understand the frustration of the lad because I've been a player myself and that would be very difficult, when your job is to keep clean sheets and then you have to give a goal away," said Smith.

"But full respect to Marcelo and Leeds United for that because it was the right decision.

"I think common sense prevailed and sportsmanship did with them allowing us to get the goal.

"Klich apologised to me as he came off the pitch, saying that things like that shouldn't happen.

"I just suggested (to Bielsa) that I thought that would be a good thing and he agreed with me. I'm not sure all his players agreed."

Leeds looked to have quickly recovered from the back-to-back defeats to Wigan and Brentford over Easter that cost them a top-two finish.

They could have clinched victory in the closing stages through Tyler Roberts and Pablo Hernandez, but Villa carried plenty of threat, with Kodjia blazing their best chance over in the second half.

"I thought it was a really good game up until that incident, I must admit," Smith said.

"And then when it went 10 v 11 there's no tougher team in this league to play against than Leeds."

"I've watched the footage back and there's nothing to it, he doesn't touch him, so we'll certainly be appealing that," he added.

Leeds remain third ahead of next week's final round of fixtures, three points ahead of West Brom, who have a better goal difference, while Villa, whose play-off place was already assured, can finish no higher than fifth.