Cork City come to Dublin after the departure of John Caulfield, the man who guided them to the league title just two season ago. John Cotter will take over on an interim basis.

City, on the other hand, are just three points clear of the relegation play-off place. Whatever about finishing in the European places, they'll want to consolidate things and not get drawn into that type of battle. 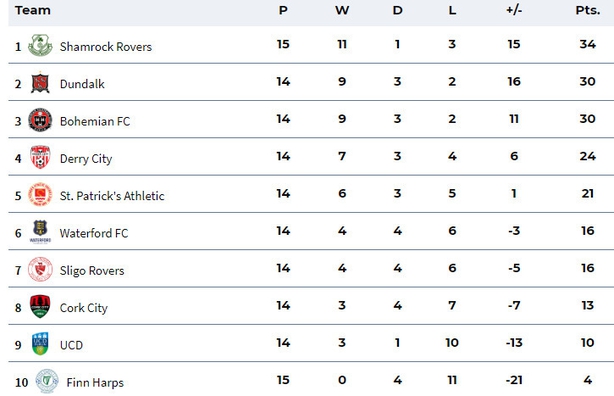 Colm Horgan, Gearóid Morrissey and Garry Buckley are all doubts ahead of the game but, on the plus side, Conor McCormack, Garry Comerford and Dan Casey return from suspension.

John Cotter (Cork interim manager): "The most important for us is to go up to Dalymount Park tomorrow night and put in a performance. This morning’s training session went great, we’ve prepared well for the game and that is our full focus now."

Dundalk are the form team in the division, coming into this game with five wins on the spin. They've hit 12 goals in that period, and conceded just two.

Like Bohs, they can close the gap to the top to a point, and Vinny Perth will want to keep the pressure on the slightly faltering Hoops.

Derry have won just once in their last four games, and they were beaten 2-0 by the Lilywhites back in March.

Dundalk: Robbie Benson remains out as he continues his recovery from a broken leg. Sean Murray and Stephen Folan are back in contention. Jamie McGrath’s injury from Monday is still being assessed and Daniel Kelly also picked up a bad injury in Waterford.

Derry City: Michael McCrudden is still out, but other than that, Declan Devine has a full squad to choose from.

John Gill (Dundalk assistant coach): "We are on a bit of a run ourselves. There’s a good vibe around the camp and we knew it was important to build on Friday.

Declan Devine (Derry manager): "We're going down to get something from the match," Devine told BBC Sport. "That's not to sit behind the ball, we're going to ask questions and see if we can play on the front foot."

"We feel we have prepared well for the games over this period and we have got five wins on the bounce. We want to keep that going now."

Ollie Horgan will be eyeing this as a chance to secure Harps' first win of the season. They've found life in the top flight tough going, and they have just four points to their name after 15 games.

UCD have a good recent record against the Ballybofey club, winning two of the last four games between the sides, including a 3-0 victory at Belfield earlier in the season, while also managing draws in the other two games.

But the Students are not getting the results at the moment, having lost four games on the bounce.

Ciaran Gallagher, Gareth Harkin and Mark Timlin are injured but Daniel O’Reilly and Colm Deasy are available again following suspensions, while John Kavanagh is back in the squad.

Ollie Horgan (Finn Harps manager): "We really need to be up for this one. UCD have some fantastic players who will punish us if we are not at the top of our game. Gary O’Neill, Neil Farrugia and Yoyo Mahdy are excellent footballers and there’s more than them, so we’ll have our work cut out to get three points.

"You seen what they done to us in Belfield so we’ll need to be a hell of a lot better to get a win."

Collie O'Neill (UCD manager): "The game is not must-win, but it’s must not lose. It gets harder and harder, particularly getting into the exam time. A lot of them are studying into the small hours, and it’s hard to keep them focused on winning games, and keeping their mind fresh."

Pat's had a solid April, winning four games, and they sit squarely in mid-table. They had won three on the spin, before defeat at Tallaght on Monday.

The recent news that Waterford won't be playing Europe League football in the summer has been a blow to the club. Their form in the league has been average, and they're closer to the clubs below them than the ones ahead of them.

The fact that Pat's are the club who will fill the spot left behind by the Blues is sure to add a bit of space to this game on the banks of the Camac.

Midfielder Rhys McCabe will miss out after suffering a concussion in the loss to Shamrock Rovers on Monday. Dave Webester is an injury doubt.

Kenny Browne, Kevin Lynch and Dean Walsh all miss out; Zack Elbouzedi and Aaron Drinan are doubts, while Bastien Hery is suspended.

Harry Kenny (Pats manager): "We had a disappointing loss to them in the RSC earlier in the season, but it could have been a different game if we had taken our chances. Our home form has picked up lately and we have won three of our last four in Inchicore so with a good crowd behind us, hopefully we can make it tough for Waterford and pick up a result."

Alan Reynolds (Waterford manager): "We’re coming to the end of a really busy couple of weeks but we just have to dust ourselves down and look to Friday night. We’re missing a few players again and Bastien [Hery] is suspended but we’ll just reorganise and look to play how well we know we can when we get going." 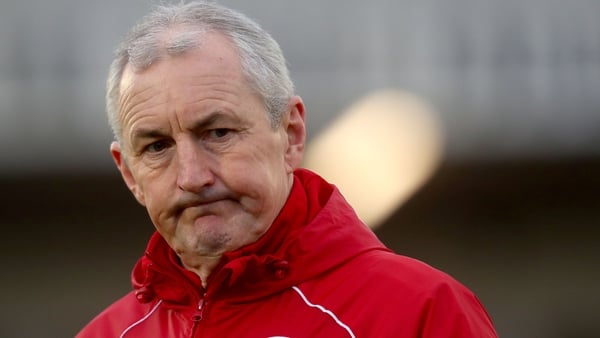