Patrick Hoban's record-breaking strike set Dundalk on their way to a well deserved victory over Shamrock Rovers at Oriel Park as the champions cut the gap at the top to just four points.

Almost six years to the day since he scored his first league goal for the club, Hoban hit number 70 to break Joey Donnelly's club record, set back in 1943, and put Dundalk in the driving seat in front of over 4,000 fans.

After a good start to the game, Stephen Bradley's league leaders were rocked by Hoban's goal and when Michael Duffy buried a low effort in the 62nd-minute it looked like curtains for the visitors.

Substitute Orhan Vojic threw a cat amongst the pigeons, though, when he slid the ball home with eight minutes to go. That led to a jittery end for the hosts but they saw it out to condemn the Hoops to a second loss in the space of four days that poses real questions about their title hopes. 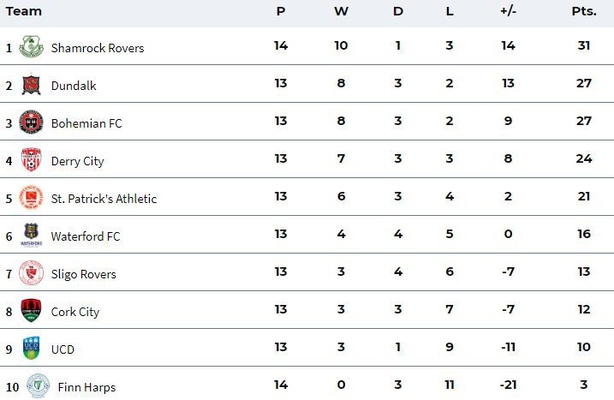 At the opposite end of the spectrum, 37-year-old Dundalk goalkeeper Gary Rogers lined out for his 486th League of Ireland Premier Division match.

Furlong took his place at left-back in an unfamiliar looking Rovers backline which saw former Dundalk star Ronan Finn shunted to right-back, where he had the unenviable task of trying to shackle Duffy.

The Rovers skipper acquitted himself well, forcing the Dundalk winger back into his own half on a number of occasions, and his bright start was indicative of Rovers' positive play in the opening 20 minutes.

With Aaron McEneff and Dylan Watts holding the upper hand in the middle of the park they enjoyed good spells of pressure without ever really working Rogers on enough occasions. Their best opportunity came in the 14th minute when Dan Carr robbed Chris Shields in the centre circle to trigger a three versus three break. Dundalk were left exposed but his pass for Byrne drove the midfielder wide and the chance went.

Byrne, who was fairly anonymous in the scoreless draw between the sides at Tallaght earlier this season, looked bright here and Rogers did well to hold his snap shot minutes later.

Dundalk took time to get going but they started to turn up the heat on young Furlong as the half went on with Sean Gannon, in particular, taking the game by the scruff of the neck. The former Rovers defender was a menace on the right and he almost created the opener on the half-hour mark, dribbling to the byline and pulling the ball back for Hoban who saw his first effort blocked by Finn and the second just clear the bar.

At that stage, the natives were in much better form. With Shields and Patrick McEleney wrestling control of the midfield, chances started to appear with Duffy's heavy touch allowing Alan Mannus to come and collect after he broke clear on the Rovers goal. A sublime McEleney pass then picked out Gannon in behind Furlong on the right again but there but there was nobody in a white shirt there to meet his drive across the face of goal.

There was a feeling of inevitability when the opener did come after 40 minutes. Duffy's corner from the right found Hoban just outside the six-yard box and he held off Lopes to angle a diving header inside Mannus' unoccupied right-hand post.

Bradley opted to keep things as they were at the start of the second half and Rovers almost pulled level within five minutes of the restart when Lopes met a Jack Byrne free but he couldn't keep it on target with Rogers struggling.

Gannon, who was immense throughout, was heavily involved. A sweeping move from left to right involving Hoban and Kelly saw the full-back take off on another buccaneering run and his cut back found Duffy, who squeezed his effort inside the post to send Oriel Park crazy.

Mannus kept Rovers in the game with a stunning save to prevent Duffy from scoring an almost carbon copy second as Dundalk pushed for a third and Bradley turned to his bench in a bid to salvage something.

Two of his substitutes combined and Vojic set up a tense finish when he latched onto a Brandon Kavanagh pass to shoot through the legs of Rogers with seven minutes still to play. That came after Lopes had an effort correctly ruled out for offside but, in truth, it was Dundalk's night and after a patchy spell, Vinny Perth’s side are beginning to look ominous.