Shamrock Rovers had two players sent off in the first half as Bohemians gleefully maintained their Gypsies’ curse over their arch-rivals with victory in a controversy-ridden Dublin derby.

Rovers’ defenders Trevor Clarke and Lee Grace saw red from referee Paul McLaughlin before Dinny Corcoran put Bohemians ahead for what proved the only goal of the game at Tallaght Stadium.

The sense of deja vu was palpable for Rovers as Aaron Greene had been harshly sent off in their only other league defeat so far this season when the sides last met at Dalymount Park back in February, Corcoran also scoring the winner from a penalty on that occasion.

Remarkably, the win makes it six victories and a draw for Bohemians in their last seven meetings with Rovers, defeat for whom ended their eight-match league winning streak.

Stephen Bradley’s side’s lead at the top of the SSE Airtricity League Premier Division table is thus reduced to five points - and they’ve played a game more - with Bohemians moving back up to second place. 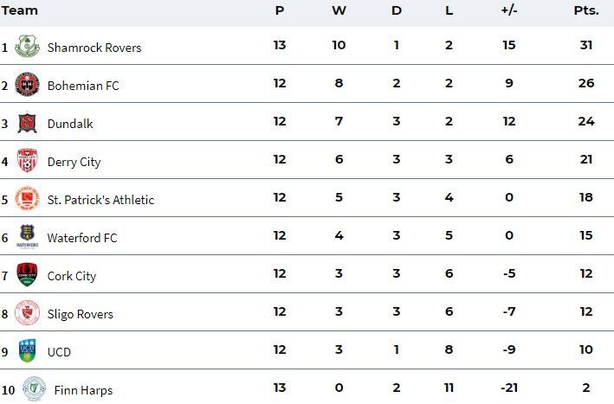 Amid a raucous, record league attendance for the venue of 6,414, Bohemians were first to threaten with Danny Mandroiu arcing a direct free kick over the bar after Grace had been booked for a foul on Danny Grant.

Though the visitors started the better, with Rovers struggling initially to get the ball, it was the home side who registered the first real chance of the game on 14 minutes.

Jack Byrne whipped the dead-ball into the area with Finn’s glancing header coming out off the crossbar.

Bohemians had another let off two minutes later. A sublime ball into the inside right channel from Joey O’Brien put Aaron McEneff in behind. James Talbot made a terrific parry save from the midfielder’s right-foot drive. 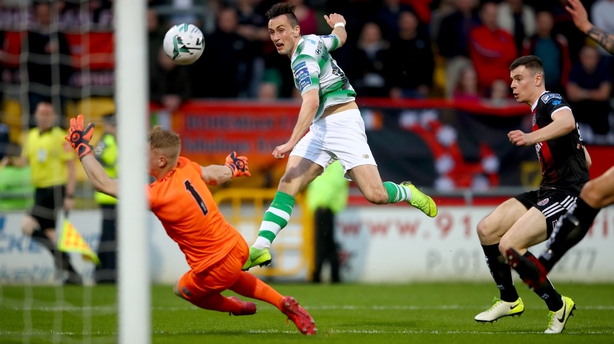 But controversy reigned on 27 minutes in the first big talking point of the opening period.

Mandroiu’s magnificent pass gave Grant a run in behind the Rovers defence and the back-tracking Clarke tugged Grant to the ground right on the edge of the area.

McLaughlin ignored Bohemians' loud appeals for a penalty to give a free-kick. And then showed left-back Clarke a straight red card.

It got worse for Rovers on 37 minutes when, incredibly, they were reduced to nine men.

Keith Buckley’s shot was deflected wide by the retreating Grace.

Bohemians’ immediate shouts for a handball and penalty were answered. Central defender Grace, despite insisting the ball had hit him in the face, was given a second yellow card and sent off. Television replays subsequently backed-up the player’s case.

The drama then continued from the penalty.

Rovers ‘keeper Alan Mannus went the right way to his left to parry Corcoran’s spot kick. But the Bohs striker was quickest to the rebound to force the ball home, injuring Mannus in their goal-line collision.

Mandroiu arrowed a low drive wide six minutes into a predictably one-sided second half; Grant not far off target with a header minutes later.

Substitute Dan Carr worked Talbot with a drive from a tight angle before Roberto Lopes was inches from equalising with a hooked shot on 76 minutes.

Substitutes Keith Ward and Ali Reghba, either side of an effort from Mandroiu, responded with opportunities for Bohemians as their hoodoo over their rivals continues.