It is a point of irony that when Celtic skipper Billy McNeill strode up the steps at the Lisbon's Estadio Nacional to claim his moment in history, he did so alone.

As the first British man to get his hands on the European Cup, McNeill - who passed away on Monday, aged 79 - will go down as one of football's finest leaders.

But he was denied the opportunity to share the moment of glory after his side's famous 2-1 triumph over Inter Milan on 25 May, 1967, with the men who had helped him achieve it.

As West German referee Kurt Tschenscher blew the final whistle, the jubilant Hoops support spilled onto the pitch to celebrate being crowned kings of the continent.

Some of his team-mates - all born within a 30-mile ring surrounding Glasgow - were stripped of their jerseys but the invasion was good mannered.

The nervy Portuguese authorities, however, feared the worst and decided on safety grounds that only McNeill would be allowed to take to the podium and lift the "trophy with big ears", as he liked to call it, while the rest of Jock Stein's players remained in the dressing room.

And so, the iconic photograph that was taken in the moments afterwards shows the sweat-drenched Celtic captain, looking drained but proud, hoisting the cup aloft but with his team-mates conspicuous by their absence.

In his autobiography, McNeill admitted that strange twist of events never sat easy with him.

He wrote: "I remember thinking, 'Where are my team-mates? Why am I the only one here?'

"The Lisbon Lions were a collective. We were a team both on and off the pitch and it felt wrong that we were denied the chance to share such a special moment."

Born in Bellshill, North Lanarkshire, on 2 March, 1940, he was the son of a Black Watch soldier and the military influence on his upbringing ensured he was comfortable dishing out orders.

He signed for Celtic from Blantyre Victoria in August 1957 and a year later made his debut in a League Cup tie against Clyde at Parkhead.

But his first seven years at the club gave little indication of the spoils that were set to flood down upon the Glasgow side as he finished campaign after campaign empty handed.

Things got so bad he almost left to join Bill Nicholson's Tottenham in 1965, just two years after being appointed Hoops captain.

"I thought Celtic were a club going nowhere," he later admitted. "I just didn't think they were going to be successful. They lost good players."

He was only persuaded to stay by a change in the club's management - but it transpired to be a wise decision as Celtic were set on the path to greatness.

"Soon after big Jock arrived - the rest, as they say, is history," he added.

It was McNeil who ended the club's long trophy drought, which had stretched back to 1957, when he powered home the winning header in the final of the 1965 Scottish Cup.

By then, Stein had transformed the Hoops into the slick, well-drilled attacking machine which would go on to win nine straight league titles.

McNeill - nicknamed Cesar - was the manager's most-trusted on-field general. While the rest of his side were focused on pouring forward, the captain was a defender first and foremost, with a fearsome approach to jousts both on the ground and in the air. 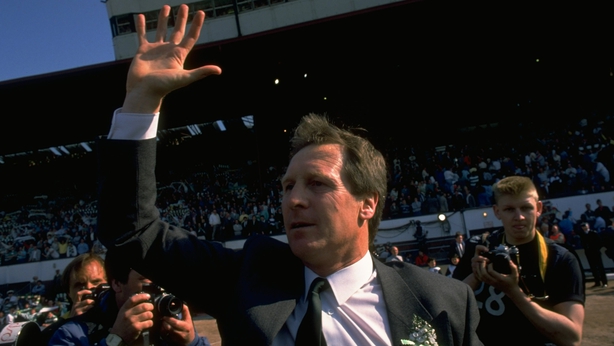 But it was his ability to cajole and organise his team-mates which was of most value to Stein.

Those attributes were never more required than in the 1967 European Cup final when Celtic fell behind to Sandro Mazzola's sixth-minute penalty.

Inter and their famed Catenaccio rear-guard were perfectly placed to choke the life out of the game but McNeill and Celtic refused to panic, hitting back through Tommy Gemmell and Stevie Chalmers to seal the most glorious of victories.

Bertie Auld, a fellow Lisbon Lion, summed up his captain when he said: "Big Billy was a natural leader. He had presence and arrogance without being big-headed. When he walked into the dressing room in 1958 I instinctively felt it was the start of something big for Celtic.

"His father had been a soldier and his mother was a strong-minded person as well. Billy was brought up to be the type who had something to say when he started to shout and bawl. He didn't have any empty words."

That victory was the pinnacle of McNeill's playing career but there were other close calls.

Feyenoord denied the defender a second European Cup in 1970 as the Scottish champions fell to a 2-1 defeat in the San Siro.

In all, McNeill - capped 29 times for Scotland - ended his playing career with nine League Championships, seven Scottish Cups, six League Cups and the most prized medal of all from his 1967 triumph.

He played every minute of the 790 appearances he made for the club.

But after hanging up his boots aged 35, he was lured back to Celtic Park three years later as he replaced Stein as boss.

A brief stint in charge at Clyde and Aberdeen was all the apprenticeship he needed for management and he made a successful return to Glasgow's east end, winning three League Championships, a Scottish Cup and League Cup.

Stints at Manchester City and Aston Villa were not so fruitful but he returned to Parkhead in time for Celtic's centenary year in 1987/88, ensuring the celebrations ended with a bang as the Hoops claimed a league and cup double.

The Scottish Cup was won again the season after but McNeill bowed out of management in 1991 as the big-spending Rangers juggernaut got up to full speed under Walter Smith.

He was awarded an MBE in 1976 but it remains a mystery to many Celtic fans that their celebrated skipper was never honoured with a knighthood.

Celtic did pay their own tribute, however, when they immortalised him in a statue outside Celtic Park in 2015. The pose chosen was that of his greatest moment, holding the European Cup aloft.

Again he stood alone but the inscription below - "Celtic's greatest ever captain" - made it clear that this was a true leader of men.

And just last week McNeill, whose family confirmed in 2017 that he had been diagnosed with dementia, was awarded a prestigious award from Spanish club Athletic Bilbao in tribute to his "faithful service" to the Hoops.

McNeill is survived by his wife of 55 years Liz, their children Susan, Paula, twins Libby and Carol, and Martyn.