McCarthy’s side struggled to stamp their authority on the game against a side containing several part-time players, as Ireland struggled to deal with the elements in the shadow of the imposing Rock of Gibraltar.

Unable to break down the stubborn home defence before the break, Ireland eventually worked the ball on goal, allowing Hendrick to guide the ball home as they began their Euro 2020 qualifying campaign with a win.

A howling wind swirling around this most exposed of stadiums as the McCarthy era began at the southern tip of the Iberian peninsula.

The new man in charge sent out a fairly predictable starting XI as both Seamus Coleman and Matt Doherty were selected – a partnership of sorts, patrolling the right side of the pitch.

Sean Maguire and David McGoldrick were asked to lead the line, while Richard Keogh partnered Shane Duffy in the centre of defence.

The conditions were always going to play a major part in this game and it was the home side who appeared most comfortable in the opening exchanges, knocking the ball around below the swirling wind.

In fact, Gibraltar had a penalty shout in the second minute as Liam Walker slapped a shot goalwards, before a clumsy foul handed Gibraltar a free-kick in a dangerous position just outside the box.

Walker whipped his effort over the wall but Darren Randolph had it covered and watched it fly over the bar.

There were seven minutes on the clock before Ireland showed any sort of composure on the ball as Matt Doherty strode confidently in off the right flank, the ball eventually finding Enda Stevens who had joined in on the left. 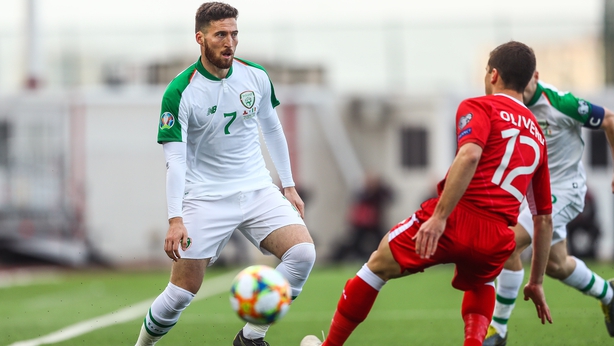 The full-back’s ball into the box was laid off into the path of David McGoldrick, but the Sheffield United man could not keep his half-volley down and the ball sailed off in the direction of the Rock.

Ireland’s first chance – albeit a half-chance – arrived from a corner in the 10th minute as Richard Keogh scooped his effort into the hands of the keeper.

And Shane Duffy nearly got on the end of a free into the box that missed everyone with 15 minutes on the clock; the big Derry man arriving at the back post but the pace of the ball just took it past his head.

Ireland started to stamp their authority on the game soon after, the home side happy to defend deep inside their own half.

But for all the possession, Ireland were really struggling to get any sort of rhythm to their play with little or no invention when on the ball.

The best chance of the opening half hour forced keeper Kyle Goldwin into a fine, reflex save, tipping the ball over the bar.

But again it did not come from great Irish play, rather some poor defending from captain Roy Chipolia who turned a point-blank header goalwards; his keeper saving his blushes.

Ireland’s play in the first half was summed up by an attempted 60-yard cross-field ball played by Shane Duffy as he tried to find James McClean.

Never likely to find his man in the relentless and swirling wind, it begs the question why he would attempt it in such conditions.

At times, Ireland did manage to keep the ball below waist height and one such situation handed McGoldrick a great chance to open the scoring four minutes before the break.

Maguire did well on the ball inside the box, before rolling Coleman in, arriving on the right. A clever low ball across the six-yard box into the forward’s feet but McGoldrick was unable to turn the ball home, under pressure from John Sergeant.

A minute later, another whipped Hourihane free beat everyone in the box, eventually flying past the far post.

James McClean’s main contribution to the first half was a yellow card on the stroke of half-time for an unnecessary challenge in the middle of the park.

Job done for Gibraltar as the sides went in scoreless at the break.

The game burst into life inside the opening two minutes of the second half as Gibraltar captain Joseph Chipolina thought he had scored after rising highest to power a superb downward header on goal.

Barely called into action in the first half, Randolph got down brilliantly to his left to somehow turn the ball around the post. 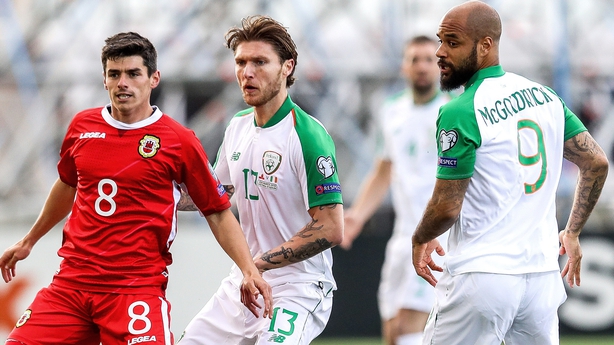 And then the home side were rocked by a quick Ireland attack down the left as Hourihane lifted the ball into the path of McGoldrick four minutes into the second half.

Clever play from the forward, to take a look and find the arriving Hendrick who calmly slotted the ball home from about 12 yards out as Ireland took the lead.

A penalty appeal was waved away seven minutes later for a push on Coleman in the box – it would have been soft but a touch clumsy by the home player.

The first change of the game saw Robbie Brady come on in place of Matt Doherty with the Burnley man sitting in on the right side of midfield.

Gibraltar, to their credit, reacted well and while Walker’s cheeky effort from the half-way line was never going to beat Randolph, Lee Casciaro almost managed it moments later as he cut in from the left and tried to place a ball into the far corner.

Randolph looked beaten but the ball just slid the wrong side of the post.

With 72 minutes on the clock, the Ireland manager looked set to settle for the most slenderest of victories as he replaced striker Sean Maguire with midfielder Harry Arter.

And in the worsening conditions, it perhaps made a modicum of sense as the home side appeared to gain a bit of momentum with Walker’s deflected effort hitting the target, however, the pace had been taken off the shot and Randolph gathered.

Walker again tested the keeper as the match moved into the closing stages, and this time Randolph had to get his body behind the ball as the drilled effort flew goalwards.

Ireland kept plugging away for a second to seal the win as Robbie Brady guided a shot wide of the post, before Shane Duffy headed wide from just six yards out.

The wind continued to howl as the game moved into injury time but the home side finally ran out of puff as they had to settle for a moral victory in what was a truly impressive showing from the tiny territory in their opening Group D encounter. 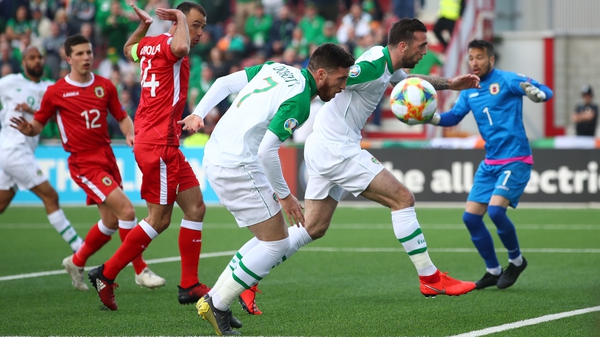 Duffy sees 'a lot to improve on' for Ireland Soccer