Ireland defender Shane Duffy admits that Ireland have ‘a lot to improve on’ after they struggled to a 1-0 victory over Gibraltar in the opening game of their Euro 2020 qualification campaign.

Mick McCarthy’s men struggled to impose themselves on Gibraltar in a game that was played in high winds and on an artificial surface.

Jeff Hendrick’s second-half goal proved to be the difference between the sides and came from a rare moment of quality from Ireland on a night in which they laboured for long periods.

Speaking to RTÉ Sport, Duffy was happy to get out of the opening game with three points, but targeted an immediate improvement ahead of their game with Georgia at the Aviva Stadium on Tuesday.

"Obviously [it was] a difficult game and difficult circumstances," he said. It was a tough night out there and they made it difficult for us, we get there in the end but there’s a lot to improve on. 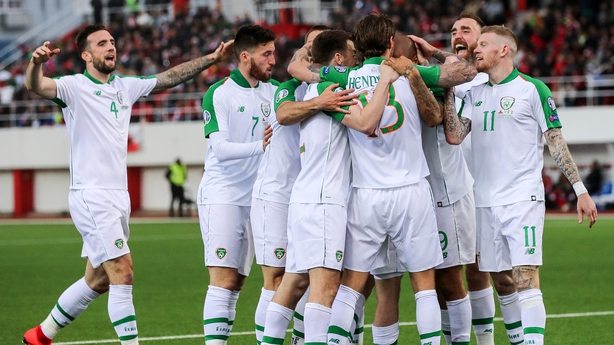 Duffy admitted that the wind played a major factor in how the game developed, particularly in the first half where Ireland played in fits and starts.

"Yeah especially first half, we tried to hit some passes as the wind just moves it. But no excuses, they had the same and they made a great fight of it.

"Obviously we want to play better and score more goals but we had chances there and it should have been comfortable in the end.

"When you get games like this, a 1-0 and they’ve always got hope until the end, we’ve done well to see it out."

Duffy also went on to pay tribute to goalkeeper Darren Randolph who made a fine point-blank save from Roy Chipolina with the game still scoreless and he insisted that he’ll be fit for the Georgia game on Tuesday, despite taking a second-half knock.

"Darren’s made a great save and it’s actually won us the game, so a lot to build on and big game on Tuesday.

"It was just a collision and my ankle twisted but it was alright after that."

Shane Duffy gives his immediate reaction after Ireland edge to a nervy 1-0 win over Gibraltar in their Euro 2020 qualifier. #rtesoccer pic.twitter.com/IjNtuF0YLE