After early victories over Cork and Sligo, Pat's form has slowed somewhat following consecutive draws with the promoted teams, Finn Harps and UCD.

Three points for them against leaders Shamrock Rovers, and they'd leapfrog the Tallaght club in the table.

The Hoops got backing to winning ways on Monday night, having drawn with Dundalk and lost to Bohs in four days, by beating Finn Harps 3-0.

Stephen Bradley's side won three of the four league clashes between the clubs last season.

St Patrick's Athletic: After a late fitness test, captain Ian Bermingham came through last week's draw with UCD unscathed, while Dean Clarke is available for selection for the first time this season.

Shamrock Rovers: Ethan Boyle was being monitored this week, but otherwise Bradley has a full squad to choose from.

Harry Kenny (St Patrick's Athletic): "We dropped two points against UCD, which was a little bit disappointing. I'd like to be creating more chances. We've plenty of new players in, and it does take time for them to gel together. So hopefully we'll kickstart that on Friday."

Stephen Bradley (Shamrock Rovers): "St Pat’s will be a difficult game, they’ve got some good players. It’s a Dublin Derby and there’ll be a big crowd. We’re ready for it and we’re looking forward to it. We did OK against Pat’s last season and it was a good goal by Danny to win it last time out there."

Their solitary victory came against newly-promoted UCD, while they've drawn other other three games against Sligo, Finn Harps and Shamrock Rovers.

Waterford won away to Cork, but they've lost two of their other three games. They did manage to take points from Bohs last week, the Gypsies first dropped points of the new season.

Dundalk: Robbie Benson (leg) and Patrick McEleney (foot) are joined on the absentee list by John Mountney and Chris Shields. Dean Jarvis will be assessed before kick-off this evening.

Waterford: Kevin Lynch remains a doubt after missing last week's match against Bohemians, while Bastien Hery is also a doubt following a foot injury picked up against Bohs.

John Gill (Dundalk first team coach): "We have been in control of the four games so far. We are happy with our performances and we are having good passages of play. The schedule gives us time to plan and we are ready for that. "

Alan Reynolds (Waterford): "They’ve been the top team over the past few seasons and we’ve had some good games against them last season, including beating them at the RSC, so we’re all looking forward to another challenging game."

That victory over their biggest rivals, Shamrock Rovers, has put a real sheen on Bohs' start to the 2019 season.

With ten points from four games, and no goals conceded, Keith Long will be very happy with how things are going.

In Derry, they face a team which has also made a bright start. Their sole reversal came away to Shamrock Rovers, and seven points from their other four games have them sitting in fourth place.

Derry: Michael McCrudden is out for up to 12 weeks with a broken metatarsal. Meanwhile winger Jamie McDonagh is suspended.

Darragh Leahy (Bohs defender): "Derry are always a tough team to play against. We beat them twice last season but like us they have a lot of new players so the challenge will be a different one. The atmosphere around the place has been buzzing and we want that to continue."

Declan Devine (Derry manager): "Last week we learnt that we can be hard to beat," he told BBC Sport. "We are going to a team in fine form who haven't conceded a goal yet. We go there confident in our own ability and it's an opportunity to get the ball down and play to our strengths and nullify their strengths."

Any illusion that the Premier Division would be a step up have been quickly dispelled for Finn Harps. Three defeats in their opening five games, and a minus five goal difference has left them second from bottom in the table.

2017 champions Cork will be similarly disappointed with their start to the new campaign. John Caulfield will know that they have to start consistently winning games, with a six point gap having already opened up to the leaders.

Finn Harps: Sam Todd, Gareth Harkin, and Mark Timlin are definitely out, while John Kavanagh is on loan from Cork, and can't play against his parent club.

Cork City: Alan Bennett, Matty Gillam won't play any part for City due to injury, while Karl Sheppard, Gearóid Morrissey, and Seán McLoughlin will be assessed ahead of the game.

Ollie Horgan (Finn Harps): "John Caufield guided Cork to a win in Sligo a couple of weeks ago. Sligo deservedly got the better of us last Friday in Ballybofey so it’s going to take some performance from our lads to get anything from the game. We have all moved on from the two defeats and have concentrated all our energies since Tuesday on being ready to give it our best shot."

John Cotter (Cork City assistant manager): "It’s always a tough place to go. Generally when we go up there, the weather seems to be poor. The pitch, at this stage of the season, will be heavy, and no doubt it’ll be a tight pitch. First and foremost, it’s going to be a battle, you’re guaranteed that. We’ll have to be ready for it."

Sligo Rovers' Romeo Parkes fell flat on his face when trying this celebration against Finn Harps. We await the next goal then. pic.twitter.com/K3Vs5uL3w6

Sligo Rovers will be looking to make it two wins from two against the promoted teams, when they host UCD on Saturday night.

Failure to do so, and Rovers could be dragged down into the dogfight with College and Finn Harps.

UCD picked up their first point of the campaign last weekend. This game, and the next one against Finn Harps at Belfield next Friday, will go a long way to telling us whether The Students can compete at this level.

Sligo Rovers: Johnny Dunleavy and Ronan Coughlan return to the squad after groin and hamstring problems. Regan Donelon [hamstring] and Ed McGinty [finger] are out.  Kyle Callan-McFadden has a back problem and is doubtful. He will be have a fitness test before kick-off.

UCD: Evan Osam is unlikely to get any game time this season, with an achilles injury, while Paul Doyle won't be available for tomorrow's game. Timmy Molloy and Neil Farrugia are doubts.

Liam Buckley (Sligo Rovers): "UCD may be down the bottom right now but you look at their performances, particularly last week, it’s clear they’ll be as good as many of the teams in this league. We know what we’re up against. It’s going to be another hard night."

Collie O'Neill (UCD): "I was getting tired of saying, 'good performance but we've nothing to show for it.' So it's nice to have a point on the board. It is important now that we look to push on over the coming weeks and start looking at moving up the table." 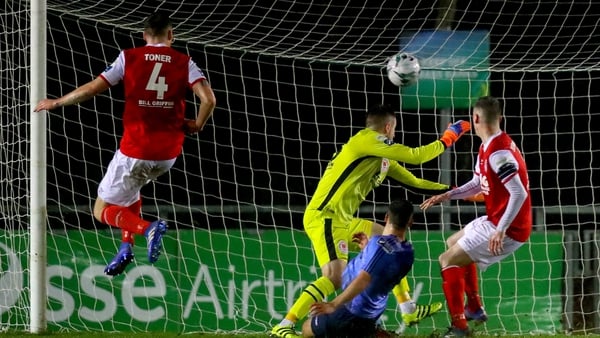 UCD hit back to snatch point against St Pat's