Sergio Aguero insists his hunger for goals comes second to his desire to win trophies.

Manchester City's irrepressible record goalscorer was close to his blistering best on Sunday as he bagged a hat-trick in the champions' scintillating 6-0 thrashing of Chelsea.

The treble was his 11th in the Premier League, equalling the record of Alan Shearer, his second in three games and his 15th in City colours.

It also saw him become City's leading scorer in league football with 160 goals, extending his overall tally for the club to 222 in the process.

Despite all the accolades, the Argentinian claims all that really matters is winning trophies and this emphatic victory took quadruple-chasing City back to the top of the Premier League.

Aguero said: "I am happy for the hat-trick and to break records in the Premier League and for the club.

"I try to keep those good memories, and special thanks to my team-mates for helping me, but what matters most is winning.

"I always try to play my game and help the team as best I can. My mentality is always to try to focus on my work and if it is with goals all the better.

"What matters to me is finishing the season in the best way and winning trophies." 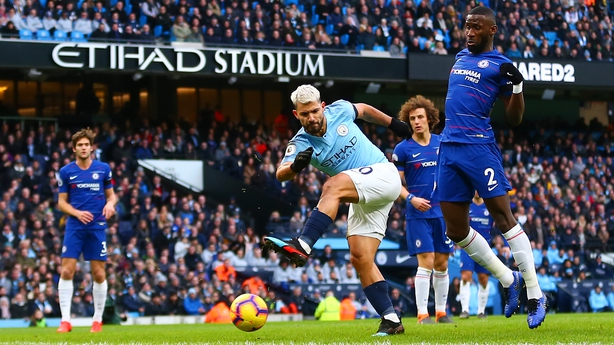 City brushed aside a surprisingly poor Chelsea at the Etihad Stadium, doing most of the damage in a whirlwind opening 25 minutes that yielded four goals.

Raheem Sterling opened the scoring after four minutes, Aguero added a quickfire double and Ilkay Gundogan also got on the scoresheet. Aguero completed his hat-trick from the penalty spot after the break and Sterling finished the rout late on.

Aguero's afternoon could have been even more profitable as he missed a sitter in the early stages and later headed against the bar. 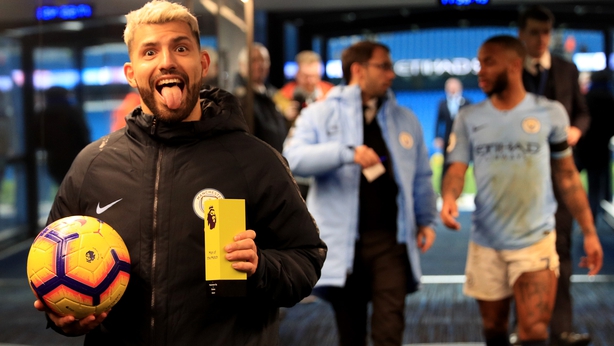 City now switch their attention to knockout football with games against Newport in the FA Cup, Schalke in the Champions League and Chelsea again in the Carabao Cup final before they are next in league action.

They do so having regained first place from Liverpool on goal difference. Their lead is a slender one, and they have played a game more, but the manner of their latest victory, which improved their goal difference advantage over the Reds to 10, was a powerful message.

Aguero said: "We had a good game. I think it might be one of the best performances of this team.

"We had great games against United, Liverpool and Arsenal but I believe it was a very nice game and an even more important result."

Reflecting on his remarkable miss in front of an open goal from two yards, which occurred when the score was 1-0, Aguero said: "Sometimes those things happen but the annoyment lasted for five seconds.

"Then I need to carry on, think about the team and try to score goals. Luckily in the next play I managed to do that."