Sergio Aguero scored a record-equalling hat-trick as Manchester City powered back to the top of the Premier League with a sensational 6-0 thrashing of Chelsea.

The prolific Argentinian joined Alan Shearer on 11 Premier League trebles as the champions returned to their ruthless best in a one-sided encounter at the Etihad Stadium.

Most of the damage came in a whirlwind opening 25 minutes, with Aguero hitting his first two of the afternoon between strikes from Raheem Sterling and Ilkay Gundogan.

That established Aguero as City's record league goalscorer, surpassing the 158 goals of Eric Brook and Tommy Johnson, and he later extended his tally to 160 by completing his treble from the spot.

Sterling put the seal on the rout by adding his second 10 minutes from time.

Aguero should even have had more, having missed a sitter in the early stages and headed against bar on a dismal afternoon for Chelsea, whose manager Maurizio Sarri headed straight down the tunnel at full-time.

While City responded in the perfect manner to Liverpool's victory on Saturday, Chelsea looked far from the top-four side they aspire to be. The loss left them outside the Champions League places and the pressure is mounting on manager Sarri.

It was Chelsea's heaviest defeat since losing 7-0 to Nottingham Forest in 1991.

It began badly as they were caught napping after just four minutes. Kevin De Bruyne released Bernardo Silva down the right with a cleverly-taken free-kick and the Portuguese cut back for Sterling to smash home.

Aguero should have doubled the lead almost immediately but remarkably missed from two yards. Silva had weaved through the area to set up a gilt-edged opportunity but the Argentinian uncharacteristically poked wide.

Manager Pep Guardiola sank to his knees in frustration but he was soon celebrating as Aguero made amends in sensational fashion. The striker played a one-two with Oleksandr Zinchenko outside the area and then unleashed a ferocious shot that flew in from 25 yards. 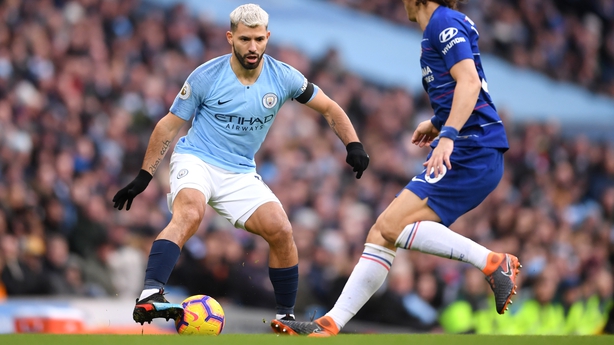 Aguero's second was gifted to him. David Luiz headed clear but Ross Barkley inexplicably headed back into the danger area. Aguero was lurking in the six-yard box and punished the former Everton midfielder with a sharp turn and shot.

Chelsea hardly had time to take stock before they conceded again, with Gundogan slotting home a neat shot from the edge after a poor clearance from Antonio Rudiger.

City eased off for the remainder of the first half, and Gonzalo Higuain even managed to test Ederson with a sharp volley, but the hosts clicked back into gear after the break.

Aguero was inches away from completing his 15th City hat-trick when he headed against the woodwork from a De Bruyne cross. He did not have to wait much longer, however, as Sterling was felled in the box by Cesar Azpilicueta. Aguero stepped up and sent Kepa Arrizabalaga the wrong way from the spot.

There seemed to be no let up from City with De Bruyne firing a free-kick at Kepa and Aguero shooting into the side-netting.

Sterling wrapped up a brilliant afternoon's work after substitute David Silva opened up the Chelsea defence yet again and Zinchenko picked out the England international.

City supporters goaded Chelsea by telling them to bring Jose Mourinho back and, after such a hammering, it may not be long before Stamford Bridge managerial speculation is ramped up again.