Wolves defender Willy Boly apologised to Bernardo Silva for the dangerous tackle which earned him an early red card in a 3-0 defeat to Manchester City.

City cut the gap at the top of the Premier League back to four points as Gabriel Jesus scored twice before an own goal from Conor Coady wrapped up the points.

But City's night was made straightforward by an early red for Boly, who was dismissed after 19 minutes for a sliding tackle which left Bernardo on the deck.

"It was quite a hard tackle but I am fine," the Portuguese midfielder said after the match. "Yes he did (apologise) at the end of the game. These things happen.

"You don't do it on purpose, I think, and he said that. Everything's fine. It's football." 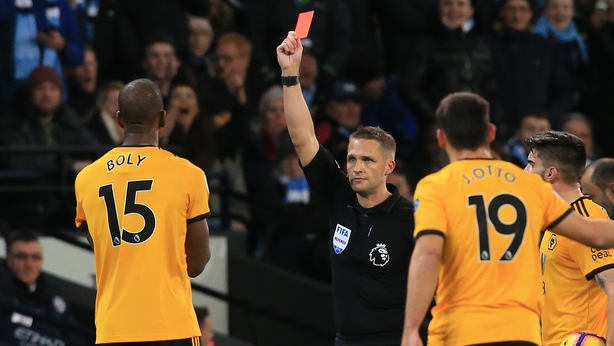 City had already opened the scoring with a fine move - Aymeric Laporte splitting the defence with a ball down the channel for Leroy Sane, whose low cross was poked home by Gabriel Jesus.

And there was no doubt about the outcome thereafter, with Jesus converting from the spot after Raheem Sterling was brought down, while Coady got the last touch when substitute Kevin De Bruyne sent a wicked ball into the box with 12 minutes to go.

That allowed City to keep the pressure on Liverpool in the title race.

"We have to wait and if they fail we'll be there. If they don't lose they will be champions"

"We cannot play the games against them," City boss Pep Guardiola said. "We cannot do anything about them. All we can do is win our games. We've spoken to our players, we cannot control what they do.

"We have to wait and if they fail we'll be there. If they don't lose they will be champions."

Wolves took a point off City at Molineux earlier this season and have a strong record against the top six, but once they went a man down their game plan went out of the window.

"We're sad, disappointed," Nuno said. "We started well, we conceded a goal we shouldn't have. Then the red card, you stay in the game but City with their speed...we have to be realistic.

"The only positive is to say it was an experience. It can happen, with one man less, the game still has something to offer. We knew it was tough, and it became harder." 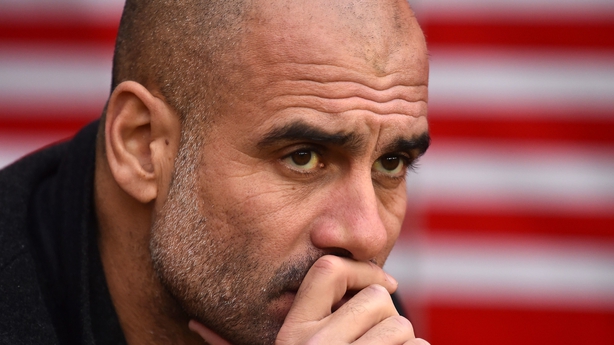 With Liverpool on 57 points from 22 games, a points tally in line with the record 100 City accrued last season may be required to win the title again, but Guardiola was not interested in setting targets.

"I don't have a magic ball to discover how many (points)," he said. "I said to them 'don't watch the calendar for the Liverpool games, forget about it, then you lose your own games. Then it's over'.

"The best way is to look at the next game - Huddersfield, new manager, we must find a way to beat them.

"If Liverpool win then I will congratulate Jurgen (Klopp) because it will be well deserved. All we can do is win our games. You saw the incredible result they had. That's why I'm pleased with the game today." 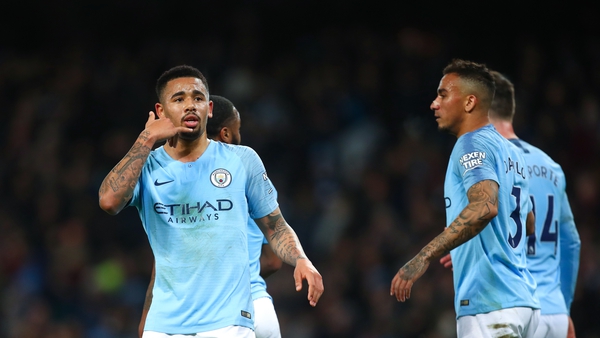 Manchester City cruise to win over Wolves as they chase Liverpool