The Brazilian struck after just 10 minutes at the Etihad Stadium and added a penalty before the break as City made easy work of their visitors, who had Willy Boly sent off after 19 minutes.

Boly, who controversially scored off his hand when the sides drew 1-1 at Molineux in August, received a straight red for a bad challenge on Bernardo Silva.

City wrapped up victory when a Kevin De Bruyne cross was turned into his own net by Wolves captain Conor Coady.

De Bruyne had started on the bench along with Sergio Aguero but, such is the depth of City's squad, their superiority was established long before either appeared in the second half.

City wasted little time in getting on the front foot. The opening goal came as Aymeric Laporte released Leroy Sane with an exquisite ball down the left and the German squared for Jesus to slide home.

Rui Patricio denied City a second soon after as he palmed over David Silva's deflected strike but Wolves' night took another early downturn as Boly was then dismissed.

The defender was reckless as he jumped in on Bernardo Silva close to the halfway line. The Frenchman did reach the ball first but he had no control of his follow-through and caught the City player's standing leg.

City had a worrying moment of their own when Jesus hit his head on the post and required treatment but he was given the all-clear to return to the game.

Wolves made a rare break through Raul Jimenez but Jonny Otto failed to find Diogo Jota in front of goal and the chance was wasted.

Raheem Sterling was tripped by Ryan Bennett. The Brazilian stuttered in his run-up and sent Patricio the wrong the way to score his sixth goal in two games.

Sterling headed straight at Patricio before the break and Sane spurned a good chance after the restart as he miscued a shot in front of goal.

Adama Traore came off the bench to give Wolves a lift but City, even though eased off the gas, remained in control. 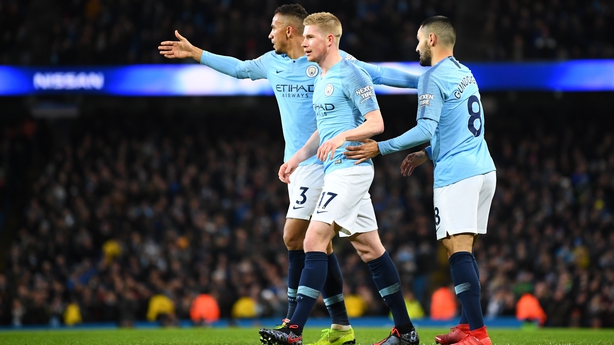 De Bruyne, who appeared unhappy when substituted in last week's 9-0 thrashing of Burton, came off the bench for the final half hour. He replaced David Silva, who had been making a club-record 267th Premier League appearance for City, surpassing Joe Hart's previous landmark.

De Bruyne was soon into the thick of the action and sent a thunderous effort narrowly wide from the edge of the area and then forced Patricio to save with a snap shot.

He then created the third 12 minutes from time as his wicked cross took deflections of Romain Saiss and Coady to find the back of the net.