A late Rosenborg goal proved crucial for Celtic as they advanced to the knockout stages of the Europa League despite a 2-1 defeat to Salzburg at Celtic Park.

Second half goals from Munas Dabbur and Fredrik Gulbrandsen, coupled with Red Bull Leipzig’s 1-0 lead over Rosenborg had Brendan Rodgers’ side staring down the barrel of a European exit.

However Tore Reginiussen's 86th minute equaliser in Germany, Rosenborg's first point of the campaign, sealed an unlikely point and ensured the Bhoys claimed second place in Group B.

Olivier Ntcham would score a late consolation for Celtic on the rebound from a missed penalty as his side lost 2-1.

Rodgers made one expected change with Kieran Tierney replacing Emilio Izaguirre after recovering from a groin issue, with experienced skipper Scott Brown again on the bench.

The atmosphere at Parkhead crackled as it does on big European nights but the visitors, who reached the semi-final of the tournament last season, were inspired more than intimidated.

In the fourth minute Hoops keeper Gordon made a superb finger-tip save from Zlatko Junuzovic's header.

Defender Mikael Lustig then took a knock to the head which required treatment during which time the Celtic fans chanted in support of Griffiths.

Salzburg looked increasingly formidable. Defender Onguene hit the crossbar with a header from a corner in the 16th minute and from another Junuzovic delivery moments later, Stefan Lainer's near-post header was beaten away by Gordon.

Lustig was unable to carry on any longer and in the 20th minute Kristoffer Ajer took over.

Celtic worked hard to get on top of proceedings, but Salzburg appeared a class above.

Midfielder Hannes Wolf had a great chance on the half-hour mark when Ajer's sloppy back pass sent him clear against Gordon but the Scotland keeper blocked the all-too casual shot.

Applause was muted at the interval whistle with Celtic fans recognising the task ahead. Brown replaced Scott Sinclair for the start of the second half and Celtic began to force themselves forward.

However, there was another injury blow for Rodgers in the 54th minute when midfielder Ryan Christie injured himself tackling Takumi Minamino and he was taken off on a stretcher to be replaced by Ntcham.

Salzburg regained the upper hand and when Lainer took a reverse pass from Enock Mwepu and slung a cross into the box, Dabbur headed into the net off Gordon from six yards.

Minutes later, the Celtic keeper did save a close-range header from the Salzburg forward after the Hoops had failed to clear a corner. 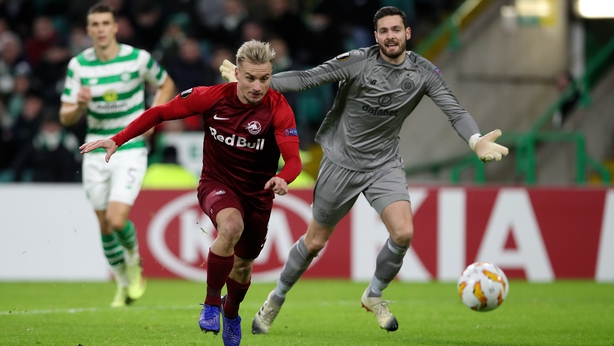 However, Gordon was at fault for Salzburg's second, his attempted throw out was blocked by substitute Gulbrandsen - on four minutes earlier for Minamino - who had the easiest task of knocking the ball into the net despite the Parkhead keeper's best efforts to get back.

It looked all over for Celtic.

Ajer managed to miss the target from three yards following a Callum McGregor corner and Ntcham's free-kick from 25 yards produced a great save from Alexander Walke.

The Salzburg keeper pushed Ntcham's penalty onto a post only to be beaten from the rebound and when news of the final whistle came in from Germany there were louder celebrations until the last kick at Parkhead. 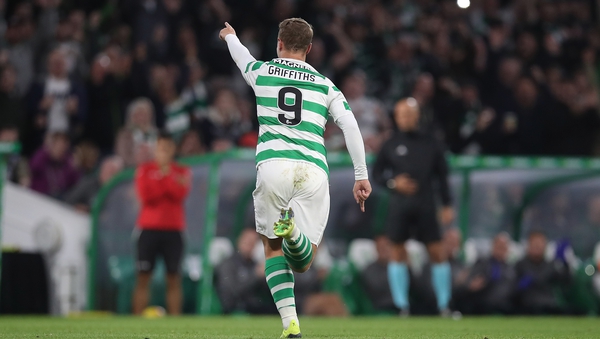 O'Dea: Football is a side issue for Leigh Griffiths