The 2018 FAI Cup final brings back together two familiar foes.

Before their last league meeting we examined how little there is between the clubs who dominate Irish football.

The players know each other all too well and the strengths they have to use and the weaknesses to be exploited.

We have examined five match-ups from across the pitch, stacked with potential match-winners, which may be crucial in gaining an edge and coming out on top. 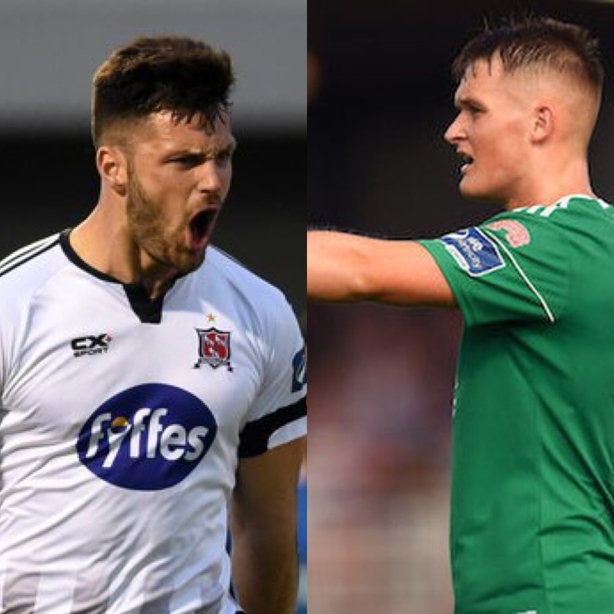 Cork have used five different players at centre-back this season making it difficult to be certain who will combat Patrick Hoban. But the one with the most starts has been Ireland under-21 international and PFAI Team of the Year member Sean McLoughlin with 27. As the most certain starter we will look at how he may stop Dundalk’s leading scorer Pat Hoban.

Hoban is not a pacey striker so it will likely come down to a physical battle. McLoughlin will need to do better than for Dundalk’s winner at Turner’s Cross recently when he allowed too much space to Hoban on the edge of the box to set up Chris Shields to score a goal that confirmed a fourth league title in five years..

Cork 0-1 Dundalk - Chris Shields takes advantage of some very sloppy Cork defending to give the visitors the lead. #rtesoccer pic.twitter.com/EmQMMNDpze

Hoban has just one goal from the four league games between the two teams. While that rate is not bad it is well below his rate of 0.90 goals per start in other games this season.

That goal was in the first meeting of the sides in March, one game before McLoughlin made his debut. No team has prevented Hoban from scoring against them this year.

Hoban is a threat from all situations with seven headers and three from his left foot. He has also been able to score from distance with three from outside the box.

McLoughlin may need to rely on the experience of Alan Bennett beside him, if selected, to combat that multi-faceted threat. 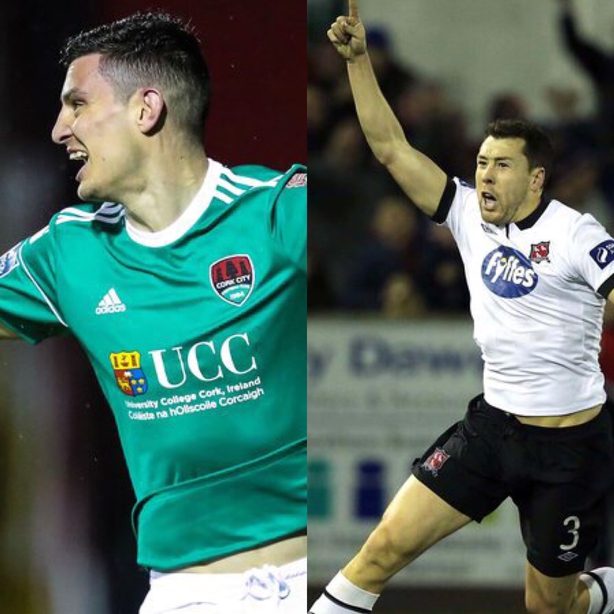 Graham Cummins has failed to score against Dundalk this year despite having a total of 14 league goals for the season – Shamrock Rovers are the only other team he hasn’t found the net against.

Cummins is a strong, aerial threat who will require a lot of attention from Gartland. He leads the league in headers scored (7) and this strength was key in the win against Bohs to reach the final.

He opened the scoring with a diving header and Bohs failure to deal with a high clearance from Mark McNulty led to him making the opening for Karl Sheppard that decided the tie.

Karl Sheppard latches onto Cummins's flick on to make it 2-0 to Cork City in the first half of the FAI Cup semi-final replay pic.twitter.com/BTRkDY0IFC

Dundalk have conceded five headed goals this season, not a high amount, but that’s 25% of the goals they have conceded. Also, almost half of their goals conceded (45%) have originated from set-pieces – this is the highest percentage in the league.

Cork may look to use the aerial prowess of Cummins, along with Buckley or their defenders, to find a way through Dundalk from high balls to the box.

Since the start of the 2015 season Gartland has started 102 league games and in those Dundalk concede 0.70 goals per game, that’s the second-lowest in the league among centre-backs.

The 17 goals he has scored is also the most for a defender making him an attacking threat in his own right also. 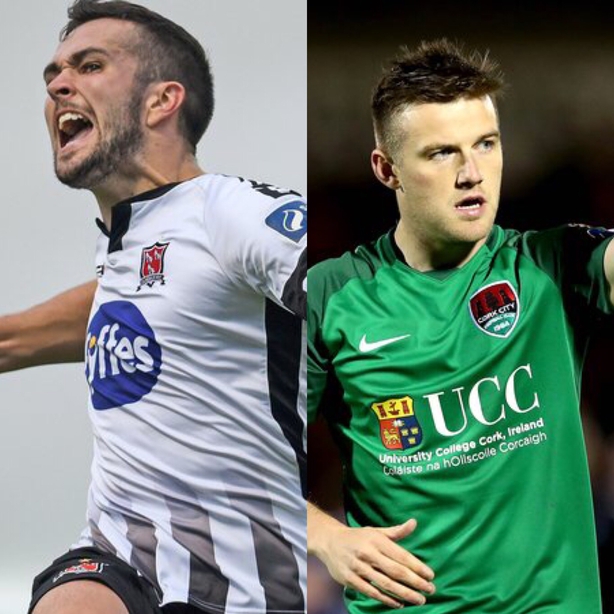 Michael Duffy has been the key creator for Dundalk all season, not to mention his goals impact. He has 23 league assists, easily the most in the league.

Combine that with this goal tally of 13 and he has been involved in 42% of Dundalk’s goals. Stop him and you are on the way to stopping Dundalk. His threat is not just going wide to cross but also cutting inside to shoot or create.

St Patrick's Athletic deployed an interesting tactic of two deep holding midfielders against Dundalk recently, meaning there was always one covering the area in-field he looks to attack. It worked for 89 minutes and Cork have the hard-working, defensive midfielders who could make it reoccur.

The right side of Cork’s defence has also been less reliable.  Steven Beattie started the season there before Conor McCarthy took the spot. His move to centre-back gave Colm Horgan the opportunity. Beattie has been back in for recent months but injury meant McCarthy went back there to see Cork through the semi-final replay against Bohs.

Cork conceded a goal from their left side in two games this season. Shane Griffin has had an excellent campaign. More teams have scored on the other side including both of Dundalk’s goals in the 2-1 Oriel Park win. Beattie is an experienced player and will need to be at this best to stop Duffy. 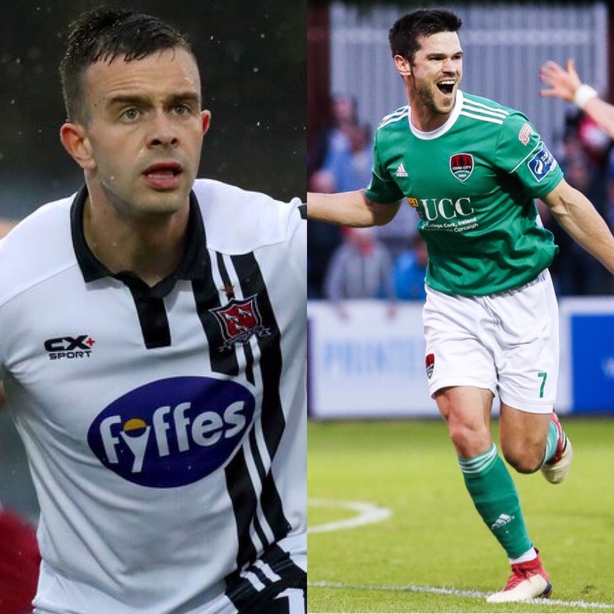 Quietly, Robbie Benson had arguably the best season of his career. He has started the most games of his time with Dundalk – 32. He had started just 35 in 2016 and 2017 combined. He is a scorer and equalled last year’s goal tally of nine, meaning only nine players have outscored the deep-lying midfield player in 2018.

He has the ability to contribute on both sides of the pitch, helping out Chris Shields on the defensive side but also creating chances with five assists for the year.

Jimmy Keohane is also an all-purpose player for Cork. He has operated on the wing, at full-back and was even given a man-marking job on Keith Ward in the semi-final replay (a potential option if Caulfield wishes to take Patrick McEleney out of the game).

Like their back four, Cork have used various combinations of Keohane, Conor McCormack, Gearoid Morrissey, Garry Buckely and Barry McNamee in central midfield. John Caulfield will have the option of using a variety of combinations from this group.

Results have been best with Keohane, they average 1.62 points per game in the 12 games he hasn’t started but 2.43 when he does. There are similar results with Barry McNamee starting while the opposite is the case for Morrissey and McCormack.

With Buckley being the most attacking of Cork’s midfielders and McCormack or Morrissey likely to protect the back four, Benson and Keohane may go head-to-head in the battle to control possession for their team.

Though Cork’s tendency to bypass the midfield and look straight to Cummins may shape Keohane’s role to be to force Dundalk into similar tactics and not build from the back through Benson as they like to do. 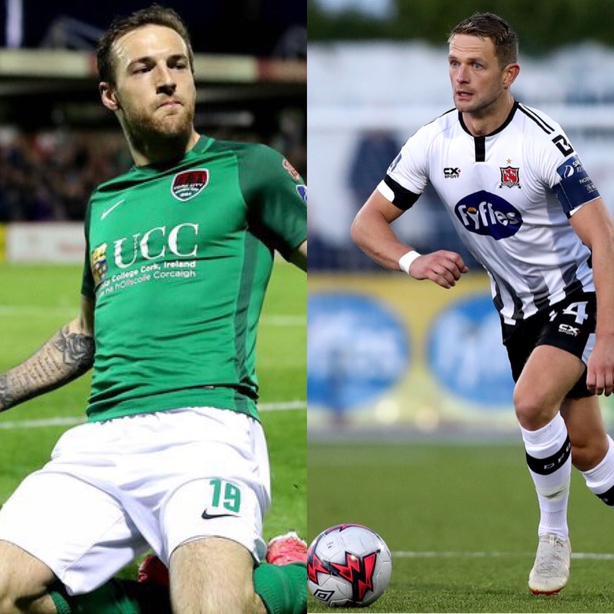 Karl Sheppard has shown the ability to make the difference in games between these teams. He has three league goals and two in the President’s Cups (which are not played as friendlies when these sides are involved). His scoring helped Cork reach this game with the semi-final winner to eliminate Bohemians. But he can also create. He is likely to line-up on the right wing with the in-form scorer Sadlier starting from the left.

In last year’s final, however, he had to work in a less-favoured central role. The introduction of Achille Campion once the Rebels went behind released him and he quickly produced the defence-splitting pass for the equalising goal.

Shortly after, he struck in the opening penalty of the shoot-out. Sheppard has six league assists in 2018, only seven players recorded more than that and all made more appearances.

When Cork defeated Dundalk again this year at Turner’s Cross the winning goal was made from his hard work and cross from the right. Moving to the other wing will put him up against Dane Massey.

He is the most experienced of Dundalk’s veteran defence with 177 league appearances over his six years since he became one of Stephen Kenny’s first signings.

That will be a tough task; just two goals have come in the league this season which originated from Massey’s side of the pitch.

Cup finals are won by teams and not individuals but winning key individual battles can set a team up for victory.

The battle between Stephen Kenny and John Caulfield to put their players in the best position to win those battles will be played for the 23rd time and for the fourth successive cup final.

All three so far have needed extra-time and both will need to apply every lesson they have learned in the past five years to get one over on their rivals.

Follow both FAI Cup finals this Sunday via our live blog on RTÉ.ie/sport and the News Now app, or watch exclusive live coverage on RTÉ2 and worldwide on the RTÉ Player from 11.45am.