Limerick welcome St Patrick's Athletic to Markets Field for their final home league game of the season, but will be focused on preparing for a promotion/relegation playoff clash with either Finn Harps or Drogheda United.

The Blues need to find some form before that tie and with their only victory in the league since August coming against relegated side Bray, they may find themselves up against a St Pat's team eager to finish off their season on a positive note.

St Pat's have won every time the sides have faced off this season, with three wins from three and while they can finish no higher than fifth place, Bohemians and Derry City could still overtake them.

Limerick Manager Tommy Barrett looks likely to call on fringe and youth players, with one eye on the play-off.

St Patrick's Athletic The Saints are without the services of midfielder Jamie Lennon who serves a one match suspension, while Christy Fagan is out with a knee injury. They are boosted by the return of Achille Campion from injury and who will be available for selection.

Ger O'Brien (St Patrick's Athletic): "Last week was a disappointing result in terms of the manner of the way we lost the game with a really late goal. I thought we were in the game up until the 70th minute and then Shamrock Rovers got on top and eventually broke the deadlock with that late goal.

"We all want to finish the season as strong as possible so we travel to Limerick on Friday looking for a win. We have done well against them this season to date so we will be looking to maintain that record." 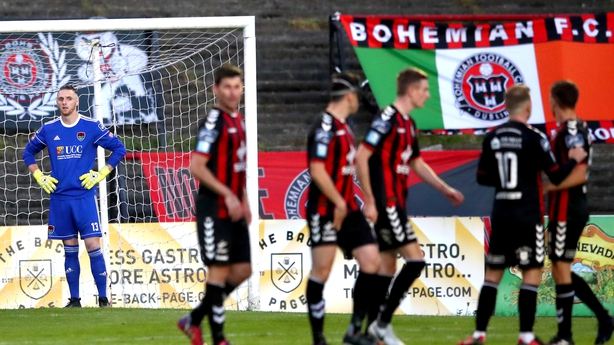 Bray's fate has long been sealed and the troubled Wicklow club will be plying their trade in the First Division next season.

With just four league wins all season, the Seagulls will be glad to see the back of 2018 but still have one more game against a Bohemians side who are finishing the season on a high.

A 3-1 defeat to Waterford last time out was a rare blip in the Gypsies' recent form, as they won their five games preceding that, including victories over Cork City and Dublin rivals Shamrock Rovers.

Bohemians: Darragh Leahy is out with a recurrence of a thigh injury. Ryan Swan (cruciate) and Ryan Masterson (quad) remain on the sidelines.

Keith Long (Bohemians): "We don’t take any opposition lightly. Bray may be down but they are doing a lot of good work behind the scenes now and are in a better place as a club now.

"We have to focus on ourselves. We always bring a big crowd out to Bray and we want to get a result.

"We want to finish the season strongly and as high up the table as possible. We have to make sure we deliver a good performance and impose ourselves on the game." 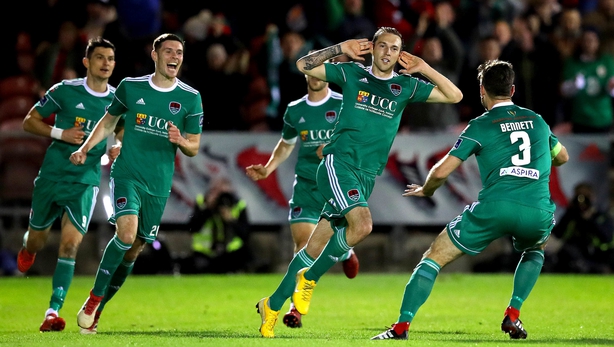 Derry's season is limping to a close but they'll hope to rally for one final big home performance as they welcomed dethroned champions Cork City to the Brandywell.

The Candystripes ended a run of five consecutive league defeats with their victory in Limerick before the international break and with player contract talks for next season getting underway, there's still something to play for.

Cork meanwhile still have work to do this season with an FAI Cup final against Dundalk yet to come. The Rebels went down fighting in the league but will be confident they can deny their rivals' double aspirations.

The Leesiders hold the edge in the three meetings between the clubs so far, winning 4-2 and 5-0 at Turners Cross with Derry managing a 0-0 draw at the Brandywell.

Derry There are no suspensions to worry about and although Dan Seaborne and Gavin Peers are carrying minor knocks, Conor McDermott is the only definite absentee.

Cork Colm Horgan, Johnny Dunleavy and Steven Beattie are ruled out, while Karl Sheppard and Alan Bennett are being monitored. Conor McCormack will miss the game through suspension.

Kenny Shiels (Derry): "I expect Cork to start with near enough their cup final team. Our style of play isn’t a million miles away from Dundalk’s so they will see that as good preparation. It also means it will be a really tough game for us but we’re desperate to finish our home programme on a high.

"We’re a bit light on the ground with 12 or 13 contracted and five development players in the squad but we’re near enough."

John Caulfield (Cork City): "We will be making a change or two from last Friday’s game. We still have our own internal targets to hit, and we are looking forward to the game.

"Ronan Hurley has done very well in the last two games and it has been great for him, so it looks like we might give him another start. Cian Murphy will travel with us as well, as will Pierce Phillipsand Shane Daly-Bütz." 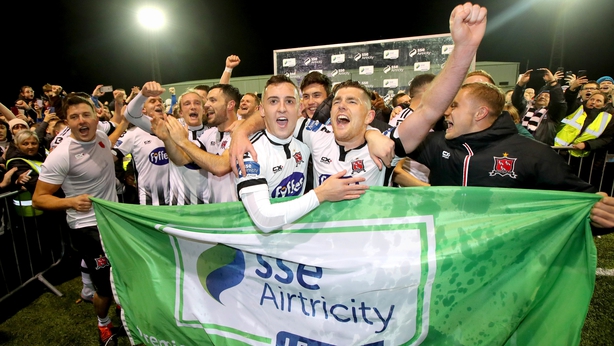 The newly crowned champions will have their coronation party at Oriel Park tonight and the RTÉ cameras will be on hand to screen the game live on RTÉ Two from 7.25pm.

The Lillywhites have the chance to achieve the all-time points record in the league with a win from their final two matches and they'll be hoping to set that record this evening.

The double is still very much within their reach too with the FAI Cup final with Cork City yet to come.

Sligo will be under new leadership for the trip to Louth with Under-19 manager Brian Dorrian handed the reins after the club parted company with manager Gerard Lyttle.

Dundalk Jamie McGrath should return and is back from international duty, Sean Hoare came back into the starting lineup last week after a hamstring injury while Chris Shields and Daniel Cleary are back in contention.

Sligo Rovers Caolan McAleer is suspended. Lee Lynch returns from illness. Gary Boylan is out with an ACL injury.

Patrick McEleney (Dundalk): "We are in good form at the minute and it won’t be easy on Friday night but we are confident. Sligo are always difficult to play against and they have changed manager so it’ll be tough. We still have a lot to play for this season and we have the records in our mind so we want to go get them.

"We have two games left and we are focused on those and we want to win as many points as we can. That’s our aim and hopefully we can get those over the next two weeks."

Brian Dorrian (Sligo Rovers): "We’ve a young squad with a lot of talent and over this season they have developed. On Friday I’d like them to go out and show what they are about. It’s not going to be easy. There’ll be a huge focus on Dundalk where they are getting ready to lift a trophy.

"We’re coming to show why there is a bright future for our club and why the person that takes over here is going to come into a good situation with a lot to work with." 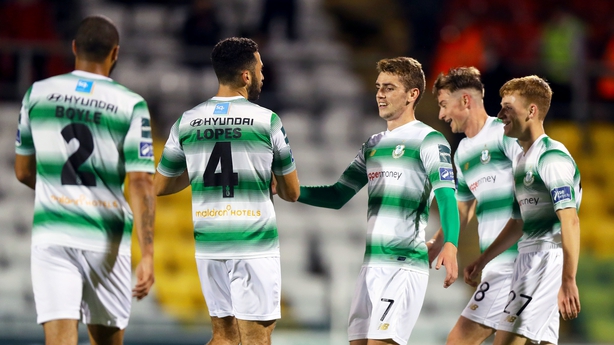 Shamrock Rovers can finally win the race for third place with a victory over Waterford tonight, while a draw would also suit their needs, unless Waterford could overturn a goal difference of 23 in their final game.

Rovers and Waterford have duked it out for that coveted third spot and guaranteed European football for much of the season but with Cork and Dundalk making it to the FAI Cup final, both sides will now be involved in the Europa League next season.

The Hoops haven't lost a league game since suffering a Dublin derby defeat to Bohemians back in August while Waterford were edged out 2-1 by Dundalk in their last game.

Shamrock Rovers Trevor Clarke looks unlikely to return from cruciate knee ligament injury that's kept him out for most of the season. Clarke had to undergo a small surgical procedure to remove a cyst

Waterford Alan Reynolds has no injury concerns ahead of the game.

Alan Reynolds (Waterford): "We have no complaints about the Dundalk result last week. We used some players who had not played recently but had been training well and deserved a chance. We changed the shape a little and we had a go. The effort was there from us but the best team won.

"We were missing players to illness and injury too but we’ll have them back this Friday.

"We’re all really looking forward to Friday. There’s a long history between the clubs and we’ve had three really tight games already and we were disappointed to lose the last game in the RSC. We know we’ll have plenty of support up there so that’ll help drive us on to try get a result."

Stephen Bradley (Shamrock Rovers): "We go to win the game, it doesn’t change for us. We know Waterford are dangerous, they’re physical and they have some really good attacking players. They’ll enjoy coming to Tallaght, the pitch will suit them. I feel that if we can play to our levels we can take three points.

"We’re on a really good run of form, we’re scoring goals and we’re not conceding. We’re playing some really good football so we’ll look to bring that again tomorrow night and go and attack Waterford from the off." 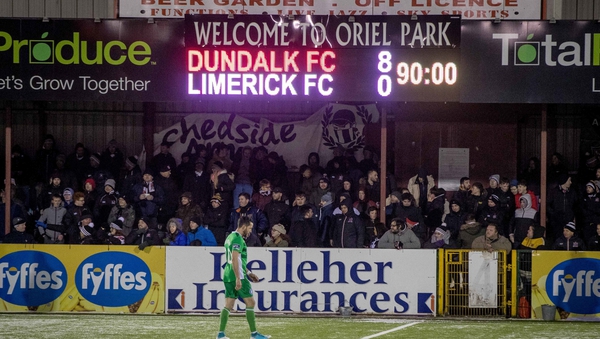