Richard Keogh believes the Republic of Ireland were hard done by in defeat to Wales but said the players will learn from the experience.

Harry Wilson's free-kick was the difference between the sides as Ireland suffered their second Nations League defeat to Wales in six weeks in Dublin on Tuesday night.

Derby defender Keogh bemoaned his team's luck after the game and believed it could have played out differently had Cyrus Christie taken an excellent 10th-minute opportunity.

"I don't think we deserved to lose. It's tough to take but that's football, unfortunately," Keogh told RTÉ Sport.

"It's disappointing to concede a set play but other than that I can't remember them having them too many chances.

"I thought the last 25 minutes was ours and on another day we would have got the equaliser.

"The first half was quite cagey. We had the big chance at the start and if that goes in, goals change games.

"We had some decent chances but we didn't take them."

Ireland have scored just two goals and are winless in five competitive games since beating Wales in Cardiff a year ago.

Keogh admitted that the poor run of form had sapped confidence but is hopeful that fortunes will turn when key men like Seamus Coleman and Robbie Brady return.

"It does a little bit but we are a group that's learning," he said. "We've lost some big characters so it's up to the other lads to step up.

"We're missing some big players as well, Seamie (Coleman), (Robbie) Brady, (James) McCarthy. They make a big difference and hopefully we can get them back and we'll be a very different animal.

"This is a young group that are learning. Nights like this will definitely help them. Experiencing that is not nice as a professional.

"When the next one comes around we've got to make sure we're ready to go again." 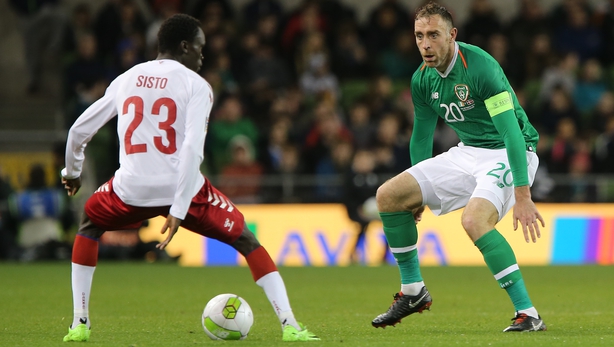 Bottom of the group Ireland now need the unlikely scenario of winning in Denmark and the Danes losing to Wales to avoid relegation to League C and a drop to third seeds for Euro 2020.

Keogh hasn't given up hope that Ireland could yet pull off a great escape but insists that being third seeds in qualifying wouldn't daunt them.

"It's been a tough group. Obviously we'd like more points on the board but the reality is now that that's not the case.

"We've got to dust ourselves down and come again. We've got Denmark to go and we need results. We'll keep fighting to the end.

"Stranger things have happened in football so we've got to make sure we take care of business and see what might happen.

"Everyone wrote us off last time in the group (for Euro 2016) and look what happened there.

"It's not ideal. But sometimes when the chips are down with this group that's when we come out fighting."