Ireland were undone by a moment of Welsh wizardry in tonight's UEFA Nations League clash at the Aviva Stadium.

After a first half lacking goalmouth action, it was the visitors who broke the deadlock from an excellent Harry Wilson free-kick in the 58th minute.

Ireland threw caution to the wind for the remaining half hour but were unable to create the requisite goalscoring opportunities despite plenty of attacking intent in the final third.

Wales now move to the top of the Group 4 table as Ireland are staring relegation to League C in the face with just one match remaining.

True to his word, O’Neill once again put down an attacking side, on paper, with Callum Robinson rewarded for his excellent cameo against Denmark, while Aiden O’Brien was asked to lead the line in place of Shane Long.

With Robinson’s inclusion, Jeff Hendrick retreated to a deeper role in the middle of the park alongside Harry Arter and Cyrus Christie, who would again be asked to play a midfield role.

Young 18-year-old Matt Smith was named in the middle of the park alongside Joe Allen. The Man City youngster is currently on loan at FC Twente in the Dutch league. 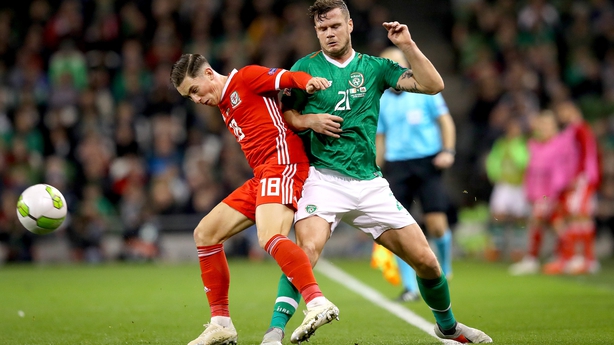 Wales looked lively from the off and went straight into the attack.

Numbers forward and with so much movement across the front of the Irish penalty box, the Boys in Green were momentarily bamboozled and gave away an early corner to organise.

But Ireland looked a different entity going forward, not just ploughing up the pitch, but passing, moving, working, looking – Robinson, Doherty, O’Brien, McClean, all involved. Kevin Long even stepping into the Welsh half to keep the attack going.

And it nearly led to the opening goal in the ninth minute of the match as Ireland drove Wales back from their own throw-in.

Young midfielder Smith then slipped on the edge of the box allowing Cyrus Christie to pick up the loose ball.

The Fulham man could have driven into the box but chose to hit it early, attempting to curl it inside the far post.

It took every sinew of keeper Hennessey’s 6ft 6in frame to get down quickly to his left and get fingertips on it to prevent the opening goal.

Granted, the pace had slowed considerably by the half-hour mark, yet Callum Robinson was enjoying the freedom of Lansdowne Road as he dropped in between midfield and defence almost unnoticed.

And his team-mates were picking him out; Shane Duffy with a remarkable pass on the turn to drill the ball 40 yards through the middle of the park, allowing Robinson to turn and run – O’Brien and McClean in support.

That particular passage of play fizzled out, but the crowd were enjoying it, and the players, likewise, looked energised and enthused.

Wales first and only real chance of the first half arrived in the 35th minute as Tyler Roberts directed a ball in from the right on target but it was easy for Darren Randolph.

Ireland then came close from a corner two minutes later as Duffy easily out-jumped Ashley Williams, and powered an excellent header on target but Hennessey was well placed and gathered with the minimum of fuss.

The best move of the game led to another Ireland chance in the 40th minute, as some fine, first-touch football saw McClean, then Hendrick and O’Brien work the ball along the edge of the box before Robinson was teed up for a shot at goal.

A blistering effort that was bravely blocked, as Smith threw his body in front of the ball, taking the full force of Robinson’s effort to keep it scoreless going into the break. 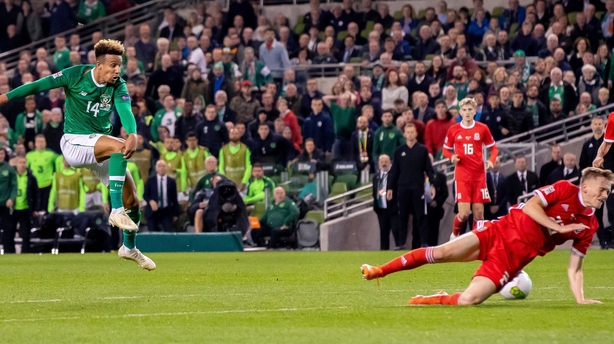 Robinson resumed where he left off as the second half got going and was really impressing in that number 10 role. His quickness of feet was complemented by his peripheral vision as he lifted a bouncing ball across to McClean in acres of space on the left edge of the box.

And the Preston man was in place, ready to nod the ball home as McClean whipped a delightful ball into the box.

But yet again, the height and reach of the Wales keeper kept his side in it as he plucked a ball out of the sky that few keepers would have got near.

Out of nowhere, Wales took the lead in the 58th minute.

A mistimed Arter tackle handed the visitors a golden opportunity, 20 yards from goal on the right side of the area.

Made for a left-footer, Harry Wilson whipped the ball into the far corner as, inexplicably, Randolph was wrong-footed, more concerned with the midfielder whipping the ball over the wall.

The keeper must take the blame as the ball was not even near the top corner as Randolph, through his choice, left an entire side of the goal unattended. Ireland looked to bounce back and new arrivals Sean Maguire and Shane Long put immediate pressure on the defence, which then allowed Doherty to race through, winning a corner for his efforts.

Hendrick made space from the set-piece, after more excellent work from Doherty, but his clipped cross just evaded all in green.

The former St Kevin’s man went it alone less than 60 seconds later, with Wales pinned back. Hendrick danced past three red shirts before making room to drill a shot on goal. Again Hennessey was in the right place to get his body behind the ball.

Scott Hogan was added to the strike force as Ireland went two at the back, Kevin Long departing. But it appeared to have the opposite affect on Ireland’s chances of restoring parity as Wales enjoyed a scintillating spell making the most of all the space in the Ireland half of the pitch.

But as long as there was only one goal in it, Ireland remained in with a shout and maintained a high-octane finish for the final ten minutes.

The energy was evident but the side lacked that little bit of creativity and composure as the Welsh saw the game out by stacking their side with defensive midfielders and shut up shop.

James McClean’s injury time effort the best O’Neill’s side could manage in the final throes of the encounter, as Ireland head to Denmark next month with very little to play for. 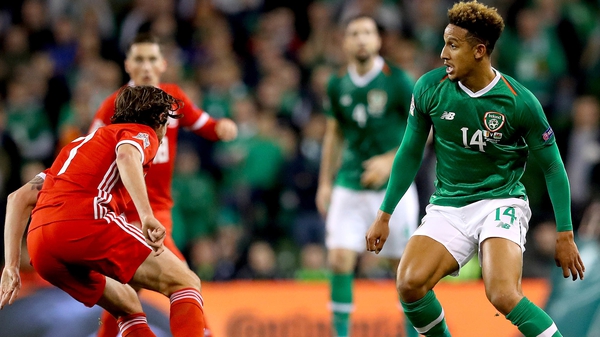