Ireland internationals Cyrus Christie, Callum Robinson and Kevin Long were all on the scoresheet for their respective clubs in the third round of the Carabao Cup.

Full-back Christie scored Fulham’s third with a shot from outside the box in a 3-1 away win at Millwall.

The 18-cap defender took advantage of the time he had been gifted to superbly curl with his left foot low and into the far left corner, well out of the diving goalkeeper's reach.

Kevin Long gave Burnley a first-half lead with a header from a corner at Burton Albion but they fell to a 2-1 defeat to the League One team.

Long was one of six changes made to the team, with Stephen Ward also coming back into the side.

PICS: Long puts the Clarets ahead with a bullet header. 0-1 📸 pic.twitter.com/uX16hLCgqq

Callum Robinson put Preston 1-0 up at home to Middlesbrough after being set up by Alan Browne.

The striker also provided an assist for their second in a 2-2 draw, which was decided on penalties.

However, Robinson, who won his first two caps earlier this month in games against Wales and Poland, missed during the shoot-out, as did fellow international Graham Burke. 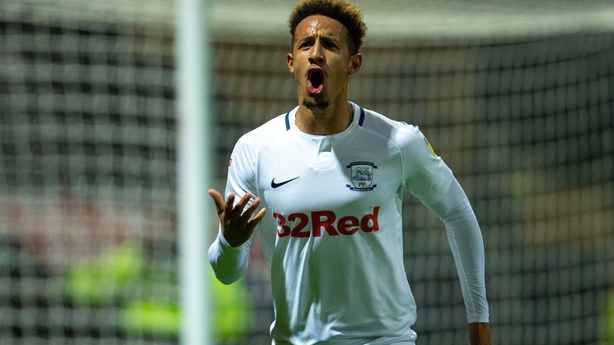 Wes Hoolahan, who retired from international football during the year, started for WBA in their 3-0 home defeat to Crystal Palace.

Richard Keogh helped Derby to a win on penalties against Manchester United at Old Trafford.

Elsewhere, substitute Callum Wilson headed a dramatic injury-time winner as Bournemouth scraped into the fourth round of the Carabao Cup with a 3-2 win over Championship side Blackburn.

With the tie heading for a penalty shoot-out, the striker rose highest at a corner to spare the Cherries' blushes after they squandered a two-goal lead.

Elsewhere in the competition, Phil Foden enjoyed a fine evening for Manchester City as the holders eased into the fourth round with victory at Oxford.

Pep Guardiola made 10 changes from the weekend drubbing of Cardiff but, despite the likes of Vincent Kompany, John Stones and David Silva coming in, it was 18-year-old Foden who ran the show.

The England Under-19 international was involved in the opening two goals, scored by Gabriel Jesus and Riyad Mahrez, before sealing a 3-0 win with his first senior goal.

Danny Ward was Leicester's hero at Wolves as the three-time winners squeezed into the fourth round on penalties.

The goalkeeper saved spot kicks from Romain Saiss, Diogo Jota and Adama Traore as the Foxes won the shootout 3-1 following a 0-0 draw at Molineux.