Manchester United slumped out of the League Cup with a defeat on penalties to Championship side Derby County at Old Trafford, after the third-round tie ended 2-2 in normal time.

With no extra time in this season's competition, the contest went straight to spot kicks and Frank Lampard's Derby won 8-7 with Phil Jones's effort saved by visiting keeper Scott Carson after Ireland defender Richard Keogh had struck home the away side's eighth penalty.

Derby had been moments away from winning 2-1 in normal time after United keeper Sergio Romero was sent off in the 67th minute but Marouane Fellaini got a stoppage-time equaliser.

Jose Mourinho's United side had taken the lead in the third minute with a well-placed shot from Juan Mata after Anthony Martial had burst down the left flank. 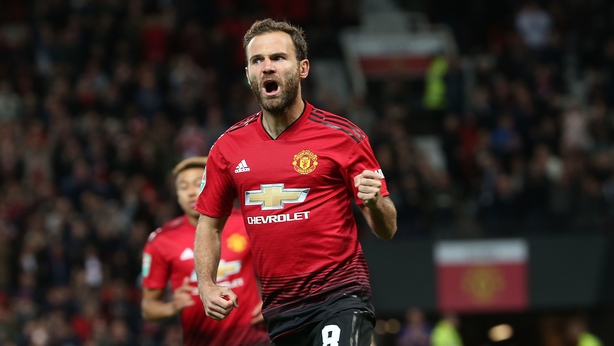 Derby drew level though in spectacular fashion after 59 minutes with a brilliant bending free-kick from Harry Wilson, the young Welsh winger on loan from Liverpool.

Eight minutes later, Romero was dismissed for handling outside the box and Derby grabbed what they thought was the winner when United's substitute keeper Lee Grant parried a shot from Mason Mount and Jack Marriott nodded in the loose ball.

But in the fifth minute of added time, substitute Fellaini headed in a Diogo Dalot cross to force the shootout.

Mourinho denied a rift with Paul Pogba despite telling him he will never captain the side again.

When asked if there had been a fall out, Mourinho told Sky Sports Football: "The only truth is that I made the decision of Paul not to be the second captain any more but no fall out, no problems at all.

"I am the manager, I can make these decisions. No fall out at all, no problems at all, just one decision that I don't have to explain."