The Seagulls hadn't trained in the build-up to yesterday's Airtricity League Premier Division clash as players wait on unpaid wages. All of them have been made available for transfer.

Bray were nine points adrift at the bottom of the table coming into the game, but they pulled off a surprise 2-1 win at the Carlisle Grounds to give themselves a much-needed lift and leave Sligo just two points clear of second-from-bottom Limerick.

Afterwards, Lyttle gave a frank and honest assessment of a poor day at the office for the westerners.

"I'm sick of saying these things to be honest," he told the club website.

"We'd got ourselves into a great position before the [mid-season] break. We thought things are looking up, we've got the team were we want them to be.

"We lost last week against Waterford and then we came here against Bray.

"Everybody was thinking it was going to be a banker and an easy three points. I was quite worried about the game beforehand. It was a potential banana skin.

He continued: "We knew the pitch was going to be brutal, we knew players weren't getting paid and weren't training. At the end of the day we've seen [Bray] players out there that probably wanted to win the game a wee bit more than us. That's the worrying thing and the frustrating thing for me.

"We should all be ashamed of ourselves, myself included. I pick a team, players go out and should put a performance in and they haven't done it. We've cheated our fans with that. It's unacceptable and something we'll be looking at.

"The only people who can fix this is ourselves."

Sligo travel to Bohs on Friday for what is now a massive fixture. Bray still look nailed on to be automatically relegated as the bottom-placed team but the second-last side will face a relegation/promotion play-off with a First Division outfit.

The Gypsies are two points ahead of Sligo in seventh place. 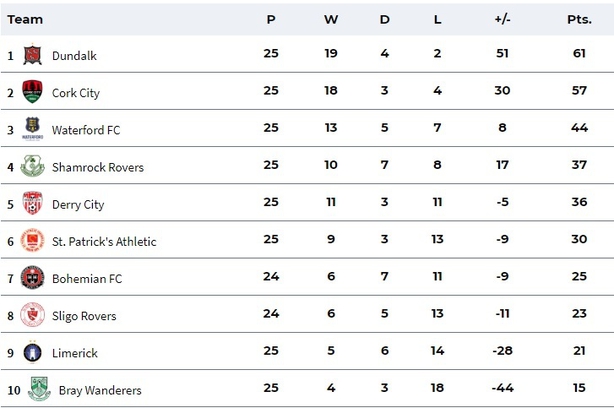