Bray Wanderers gave their slim chances of Premier Division survival a shot in the arm as they beat Sligo Rovers at the Carlisle Grounds.

Ger Pender handed the Seasiders the lead in controversial circumstances on 15 minutes.

Sligo fought their way back into the tie through Adam Wixted, but Sean Heaney popped up to head home Rhys Gorman’s free-kick on 76 minutes.

Bray hit the headlines for all the wrong reasons earlier this week, allowing a number of key players depart the club due to financial difficulties.

But the Seagulls showed little sign of a club in flux as they enjoyed a lively opening against a pedestrian Sligo showing.

Gorman forced Mitchell Beeney into an early save before Jake Ellis wriggled free of Kyle McFadden, only to side the ball narrowly past the far post.

Rovers handed a first start to new signing Mikey Drennan and the former Shamrock Rovers man was involved on ten minutes when Heaney’s attempted clearance didn’t make it all the way to goalkeeper Evan Moran. The alert Drennan unable to find the target from close range.

Without a win since the first day of June, things looked good for Wanderers when they hit the lead on the quarter hour.

Gorman’s ball over the top picking out Pender who saw off the challenge of Kyle Callan-McFadden. With referee’s assistant Wayne McDonell several yards behind the play and Pender seemingly in an offside position, the striker was left free to fire past Beeney to hand the basement side the lead. 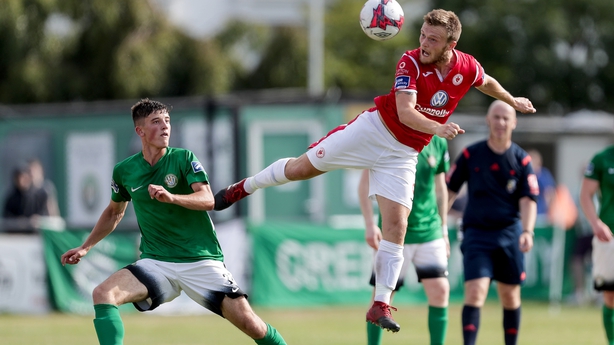 Sligo lacked pace and energy in the final third. Seamus Sharkey firing wide with a speculative effort from the edge of the box with no better option in front of him. While David Cawley’s deflected effort fell into the path of Drennan, but the Kilkenny native couldn’t find the angle whilst off balance.

Sligo’s best opportunity of the half arrived three minutes from the break. Moran landing the ball on the foot of Raff Cretaro in his attempts to find a team mate. The Bray keeper atoning for his error as he got down to hold on Cretaro’s drive.

Moran was on hand to divert Cawely’s stinger away from goal shortly after the restart as Sligo started the second half with purpose.

But the Bray net minder was unable to keep out Sligo’s leveller on the hour. Caolan McAleer and Cretaro combining to pick out the loose Wixted at the back post, who nodded home for his second goal in as many games.

Wixted was involved again 74 when substitute Lewis Morrison laid the ball in front of the winger. Moran punching away Wixted’s lash at goal.

Bray moved back into the lead on 76 minutes. Heaney rising highest to head Gorman’s whipped set-piece from the left beyond Beeney.

Rovers were offered a wonderful chance to level the game again eight minutes from time. Moran using his legs this time to deny Morrison while one-on-one.