Southampton manager Mark Hughes felt the pre-match row over his side's cancelled hotel booking in Swansea worked in their favour ahead of a crucial 1-0 win in Wales last night.

Manolo Gabbiadini's 72nd-minute winner - four minutes after the Italian striker had come on as a substitute - pushed Swansea towards the Premier League trapdoor and confirmed West Brom's relegation.

It leaves Southampton on 36 points - three above Swansea and with a better goal difference of nine on their Welsh rivals - ahead of Sunday's final game, at home to the champions Manchester City.

Southampton had ended up staying 35 miles away at the Vale of Glamorgan resort - an hour away in M4 rush hour traffic - after their block booking in Swansea city centre was cancelled because of a "virus" at the Marriott Hotel.

Hughes had expressed his anger over that in a television interview before kick-off after the Saints squad had completed the final 100 yards of the journey on foot to ensure they were not held up entering the stadium.

"I'm not for one minute suggesting Swansea had anything to do with that," Hughes said of the hotel row.

"Maybe it was over-zealous Swansea fans in positions to affect our hotel booking.

"But those things you can use to your own benefit as a motivating factor.

"We got held up a little bit outside as well because we were first here on the coach and apparently we were meant to wait for Swansea.

"But we weren't going to do that. We were too focused, we got off the bus and walked the 100 yards into the ground.

"We weren't going to be denied and messed about." 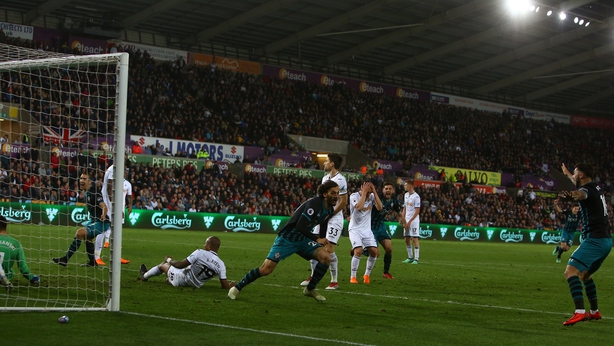 Swansea are at home to already-relegated Stoke on the final day.

"Those celebrations shouldn't be misinterpreted," said Hughes, who was so caught up in the joyful post-match scenes with his players and staff that he failed to indulge in the customary post-match handshake with his Swansea counterpart Carlos Carvalhal.

"They were emotion as a consequence of winning this key game.

"We had to win and we understood that and it wasn't that we were celebrating staying up because there is still an issue to be resolved in that regard.

"There is a little bit of a cushion but we are playing Man City and we have to be careful.

"If there is one team in this league who has the capability of scoring a lot of goals, it's Man City."

Hughes' side have now taken seven points from their last three games.

Swansea's best chance of survival now seems to rest on overcoming Stoke and seeing Huddersfield lose their final two games, at Chelsea on Wednesday and at home to Arsenal on Sunday.

Were that to happen, Swansea would finish above Huddersfield on goal difference.

"It's horrible not to depend on ourselves," said Swansea boss Carvalhal.

"Let's see what will happen (at Chelsea). If we still believe then we can stay (in the Premier League), we must do our part on the weekend and win the game.

"After that, we can wait that a kind of miracle can happen."