Southampton took a huge step towards safety as a 1-0 win at Swansea inched their Welsh rivals towards the Premier League trapdoor and relegated West Brom into the bargain.

After 72 minutes of frenetic action, substitute Manolo Gabbiadini provided the decisive moment when he reacted quickest to Charlie Austin's parried shot in a crowded goalmouth.

Gabbiadini had only been on the pitch for four minutes and it was only his fifth goal of a difficult season for the Italian.

West Brom needed a draw here to stay alive until the final game, but their brave bid under caretaker manager Darren Moore is over and the Baggies will spend next season in the Sky Bet Championship.

Southampton had looked dead and buried when Mark Hughes came in to replace the sacked Mauricio Pellegrino in March.

But seven points from three games has given Saints a huge opportunity to escape the drop on the final day this weekend, even if their final game is a home date against the champions Manchester City.

The Saints' goal difference is also nine better than Swansea's, so they will be safe barring a significant turnaround.

Huddersfield also remain in the mix given the poor state of their goal difference, although one point from remaining games against Chelsea and Arsenal will ensure they finish above Swansea.

If there was not enough riding on this game, the contest had been given an added edge by Southampton being told there was no room at the inn - in this case Swansea's Marriott hotel.

Instead, they stayed an hour away when M4 rush hour traffic was taken into account, although Hughes' squad were at the Liberty Stadium at the conventional time - 90 minutes before kick-off.

There was tension in the air at kick-off with the stakes so high and that anxiety soon transferred to the pitch.
Passes were misplaced with almost embarrassing frequency and no-one was able to provide composure to a contest played with fast-forward button on. 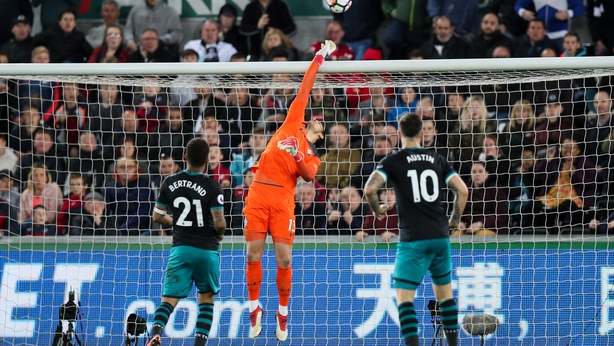 At least both goalkeepers remained calm amid the mayhem, Lukasz Fabianski holding Ryan Bertrand's grass-cutter and Alex McCarthy not bothered by the presence of defenders in front of him to clutch Andy King's attempt.

The home crowd demanded a penalty when the ball struck Wesley Hoedt's arm, but the Saints defender was on the ground and contact was certainly not intentional.

Swansea were sloppy in possession and almost architects of their own downfall when Ki Sung-yueng hesitated to allow Austin to fire wide.

Moments later Austin had an even clearer opportunity when he raced onto Pierre-Emile Hojbjerg's pass but Fabianski was equal to the effort.

Swansea applied some set-piece pressure with Sam Clucas diverting King's cross wide, but it was Saints who again threatened before the break.

Cedric Soares centred and Austin struck his volley cleanly but Fabianski was perfectly positioned to make the save look easy.

Jordan Ayew had been Swansea's stand-out first half performer and he forced McCarthy into an excellent save from 20 yards within two minutes of the re-start.

But Southampton remained dangerous and Fabianski denied Austin twice, the second time from eight yards when the striker sent his free header straight at him.

Both managers made positive substitutions as Tammy Abraham was sent on for Swansea and Shane Long and Gabbiadini provided Southampton with extra attacking options.

Abraham brought a save from McCarthy, but it was Gabbiadini's goalmouth instinct that proved crucial as he was the first to react when Fabianski pushed out Austin's shot.

Swansea huffed and puffed for an opening after that, but their seven-season stay in the Premier League is now in real jeopardy.