With John Caulfield serving a one-match suspension after the 'carry on' at the RSC, his trusted lieutenant John Cotter called the shots as Cork City edged out Sligo Rovers on Tuesday evening.

The victory at Turner's Cross was one where the Premier Division champions toiled for long periods. Substitute Jimmy Keohane eventually broke the deadlock on 78 minutes to ensure the home side keep up the pressure on Dundalk.

Cotter was keen to stress his place in the overall Cork set-up as he reflected on the victory to RTÉ Sport.

"John Caulfield is in charge, make no mistake about it," he said.

"It was a great win, a great three points, even though we didn't play particularly well. We dug in and kept a clean sheet. We always fancy ourselves to get a goal and luckily Jimmy Keohane came off the bench and got the goal."

Stressing the depth of the City squad, Cotter added: "We took off a midfielder and Jimmy was introduced. The decision was a collective thing.

"Josh (O'Hanlon) and Aaron (Barry) also came off the bench tonight and had a great impact.

"You win nothing with 11 players. We need every player in the squad. That's what you want, players to come off the bench and make an impact."

As things currently stand, Cork and Dundalk could be set for another intruiging battle for the league title, but Cotter feels much can happen between now and the end of October.

"There's a long way to go in this league. It won't be until the last seven or eight games that things will really develop," he predicted.

"We have had five league game at home, won five and haven't conceded a goal.

"We have to recover now. Another massive game is coming up on Friday at Bohs."

Subscribe to the Soccer Republic Extra here, or listen to the latest episode above. 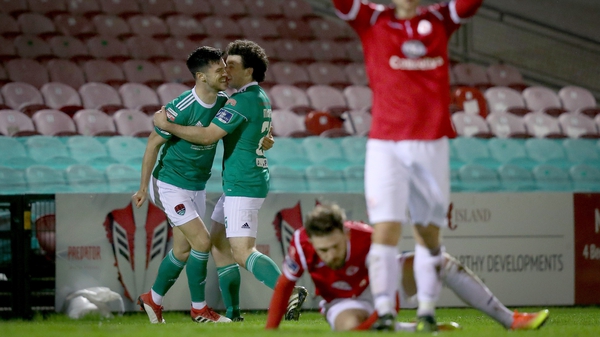