Bohemian FC took their place in the third round of the EA Sports Cup with a dramatic penalty shootout defeat of a battling UCD at Dalymount Park.

The Students, top of the First Division, gave as good as they got in an entertaining tussle but will feel they let this one slip from their grasp having raced into a two-goal lead.

Yousef Mahdy broke the deadlock 21 minutes, haring on to Daire O'Connor's through ball and placing it past Gypsies keeper Colin McCabe.

They double their lead 14 minutes later when Gary O'Neill bent a terrific finish into the top corner.

Bohs looked rattled but they got a major shot in the arm in the 54th minute when Eoghan Stoke fizzed home an excellent reply.

With eight minutes to go, the hosts forced extra-time. Darragh Corcoran chopped down Dan Grant in the box and JJ Lunney converted from the spot.

O'Neill twice threatened for UCD in extra-time but it went to the lottery of penalties, and when Paul Doyle missed his kick, Stokes stepped up to put Bohs in the hat for round three.

The #bitored keep the elusive clean sheet and Adam Morgan with a late goal to seal a place in next round.

A physical, scrappy game played in tough conditions yielded few chances in the first half, though Morgan always looked menacing, and the former Liverpool striker volleyed just over on 27 minutes.

The first goal was always going to be crucial in such a tight game and it came nine minutes from time.

Rhys McCabe's 25-yard free-kick was saved by Tadgh Ryan but Morgan pounced on the rebound to slam home.

Galway threw everything at the Bit O'Red in a frantic finale, but Sligo held on. 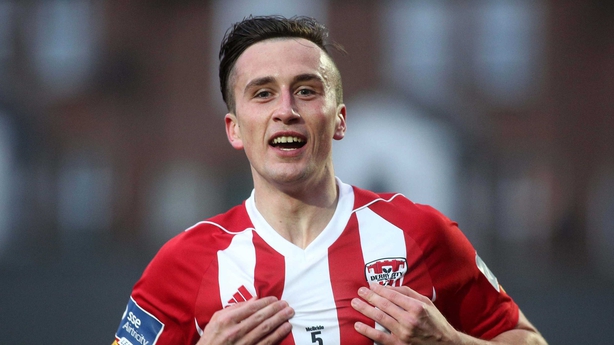 Derry City responded to an early setback to turn it around at Finn Harps and squeak a 2-1 win.

Ciaran Coll fired the First Division outfit ahead 11 minutes in but the Candystripes stepped up a gear.

Aaron McEneff - who scored a brilliant brace against St Pat's on Friday night - levelled from the spot in the 29th minute after he himself was fouled in the area by Mark Hannon.

And on 63 minutes Rory Patterson nudged Kenny Shiels' men in front. Ronan Curtis curled in a peach of a cross which Patterson expertly steered home on the half-volley.

Five other cup games were wiped out by heavy rain across the country.