Leaders Manchester City strolled past West Brom to maintain their grip at the top of the Premier League.

Leroy Sane, Fernandinho and Raheem Sterling scored to clinch a 3-2 win at The Hawthorns and wrap up an eighth straight league win.

Jay Rodriguez briefly equalised for Albion and Matt Phillips capitalised on Nicolas Otamendi's late mistake to give the scoreline a closer look than Albion deserved.

But Pep Guardiola's City side remain unbeaten and sit five points clear at the top.

Guardiola had the added luxury of leaving Sergio Aguero on the bench, with the striker still chasing the goal to make him the club's record scorer.

Tony Pulis' Albion are winless in their last nine outings, have won just four times in 24 games stretching back to last season and now sit just two points above the relegation zone.

They had not beaten City in the league since 2008, when the City team contained Michael Ball and Benjani, and in their last 15 meetings the Baggies had drawn once and lost 14.

There was a sense of inevitably, especially with Sane having scored twice in City's League Cup win in September, as the winger started a goal rush after 10 minutes.

The Germany international continued his Hawthorns hot-streak when he collected Fernandinho's pass to drill an angled drive past a statuesque Ben Foster.

While it was expected to kick off a City procession Albion hit back just three minutes later when John Stones failed to deal with Gareth Barry's lobbed pass and Rodriguez stole in to coolly lift the ball over Ederson. 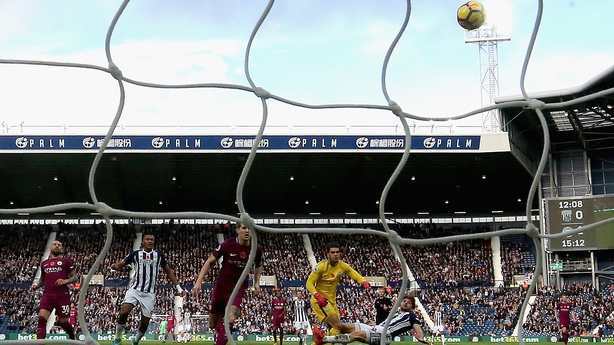 Yet the hosts were only level for two minutes as Fernandinho's 25-yard effort crept in off the post after clipping Barry.

There were just four minutes and 56 seconds between all three goals and enough action for the half as City controlled the tempo.

They still should have gone 3-1 ahead but David Silva planted a free header over after 27 minutes.

Salomon Rondon directed a header over just before the break but Albion's raids were becoming less frequent.

Yet they could have levelled again with the first attack of the second half but, after a fine sweeping move, Grzegorz Krychowiak's header flew straight at Ederson.

Normal service quickly resumed as the visitors camped in Albion's half without immediate success, credit to the Baggies' combative powers even if they lacked a spark going forward.

Two Kevin De Bruyne efforts flew off target but Sterling sealed the win in the 64th minute, three minutes after coming off the bench, when he applied the final touch to a sumptuous City move.

De Bruyne could have added the gloss late on but fired wide before Phillips struck in injury time after Otamendi failed to chest the ball back to Ederson.

Arsenal came from behind to beat Swansea in Arsene Wenger's 800th Premier League game in charge of the Gunners.

Wenger stuck with the same side that thrashed Everton 5-2 last weekend and they eventually came up with the goods to secure a 2-1 win and move within a point of rivals Tottenham in third place.

Sam Clucas had given Swansea a first-half lead with his maiden goal for the club but Sead Kolasinac levelled after the interval before laying on Aaron Ramsey's winner seven minutes later.

While Wenger stuck with his big-name attacking trio of Mesut Ozil, Alexandre Lacazette and Alexis Sanchez, it was Kolasinac - as well as midfield pairing Ramsey and Granit Xhaka - who shone.

Paul Clement set up defensively at the Emirates Stadium as the Swans looked for their fourth league win in the last six years here. 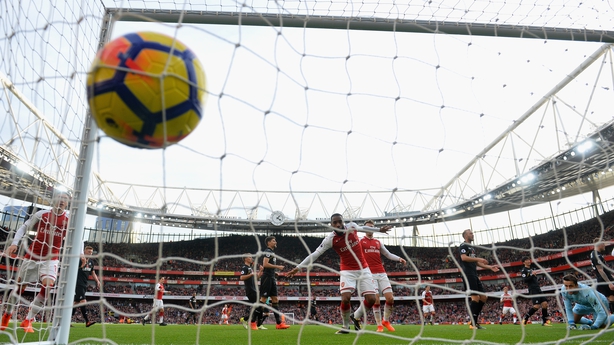 Arsenal set to their task immediately but failed to break down a determined defensive unit in the opening exchanges.

And the visitors made them pay as they opened the scoring in simple style, Clucas latching on to Tammy Abraham's pass to ghost into the box unmarked and finish low past Petr Cech.

The game slipped back into the same routine but still Arsenal could not create any chances, with Clucas firing wide as Swansea again looked to hit them on the break.

Swansea were almost gifted a two-goal half-time lead as Per Mertesacker was caught in possession inside his own box, with Jordan Ayew stealing the ball from the Arsenal skipper but opting to shoot rather than square to Tammy Abraham, who was free in front of goal.

It took less than six minutes of the second half for Arsenal to level, Lacazette feeding Ozil whose shot was deflected out for Kolasinac to arrow home.

Swansea's fans thought they had retaken the lead immediately but Abraham was flagged offside before finishing high into the net. 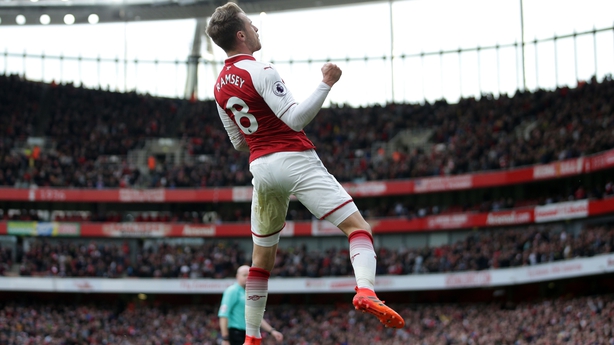 It did not take long for the second Arsenal goal to come, however, Kolasinac collecting a cross-field pass from Granit Xhaka before crossing in for Ramsey to sweep home.

Like for much of the contest, Arsenal then controlled proceedings without being able to add to their lead, substitute Olivier Giroud coming closest as he bent an effort inches wide of Fabianski's post in the dying moments.

Bilic had admitted this was another crunch few days for his future as manager and the visitors looked on course for a morale-boosting win when Javier Hernandez and Andre Ayew put them two up at Selhurst Park.

But Palace came roaring back in the second half as Luka Milivojevic's penalty and a stoppage-time strike from Zaha earned Roy Hodgson's men a dramatic point.

Darren Fletcher volleyed his first goal for Stoke to take the wind out of Watford's sails.

The Hornets were looking to cement their place in the top six, but Fletcher's Paul Scholes-style strike from the edge of the area secured a first away win for City.

The 1-0 victory also eased the pressure on Stoke manager Mark Hughes, who was in danger of becoming the latest boss under the microscope following four defeats in five matches.

Yet Watford had started with all the confidence of a team who kicked off in sixth place in the Premier League, with wingers Andre Carrillo and the in-form Richarlison looking in particularly menacing mood.

But for all their swagger in the first 15 minutes, they could not find a way past the massed ranks at the back for Stoke.

Instead, with their first corner of the match, the visitors took the lead courtesy of Fletcher. 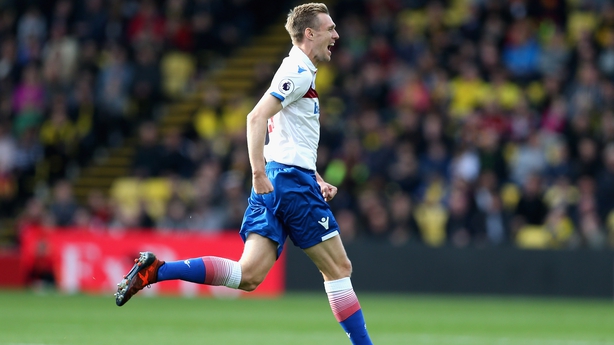 The strike was reminiscent of one his old Manchester United team-mate Scholes might have scored, as the midfielder met Xherdan Shaqiri's cross with a crisp volley from the edge of the area.

The ball may have taken a slight deflection on its way underneath Hornets goalkeeper Heurelho Gomes, but Fletcher did not care as he raced to celebrate with Hughes on the touchline.

Potters substitute Saido Berahino should have wrapped things up six minutes from time when he raced through but prodded his shot wide to prolong his search for a Stoke goal.

Tempers then momentarily flared and Abdoulaye Doucoure and Mame Biram Diouf were booked after squaring up on the touchline, and another melee in injury-time saw Allen and Troy Deeney go into the book.

Seconds later Charlie Adam thought he had settled the match when he skipped past Gomes, who had gone up for a corner, but when he rolled the ball towards an empty net it came back off a post.

Nevertheless Hughes and Stoke had done enough to earn themselves some respite at the foot of the table. 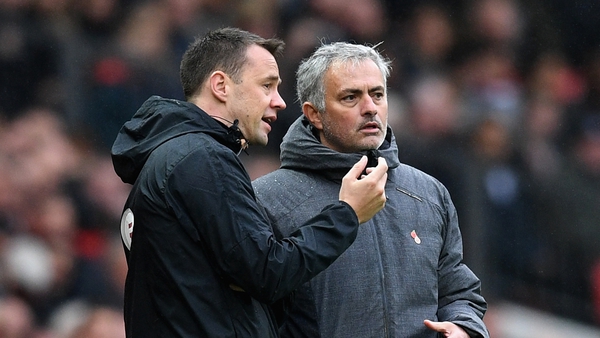