The Brazilian looked to have suffered serious injury in a nasty collision with Liverpool's Sadio Mane last weekend.

Ederson was caught in the face by a high boot and received treatment for eight minutes on the field before being carried off on a stretcher wearing an oxygen mask.

The £35million summer signing did suffer facial wounds that required eight stitches but there was no concussion and no fractures.

He has since returned to training, wearing rugby-style protective headgear, and is in contention to face the Dutch champions having travelled to Rotterdam with the squad.

An appeal by Liverpool against the three-match ban for the red card shown to Mane was dismissed on Tuesday.

Manager Pep Guardiola will make a late decision but revealed on the eve of the Group F match that Ederson was training well.

Asked if the incident could make Ederson hesitant in future, Guardiola said: "I could understand that feeling if he felt that, but in today's training session there were two or three long balls and he was there. Of course that can happen but we will see."

He added: "I think all the players have a professional level, a high level, all of them have an amazing character to play. When they are fit all of them want to play." 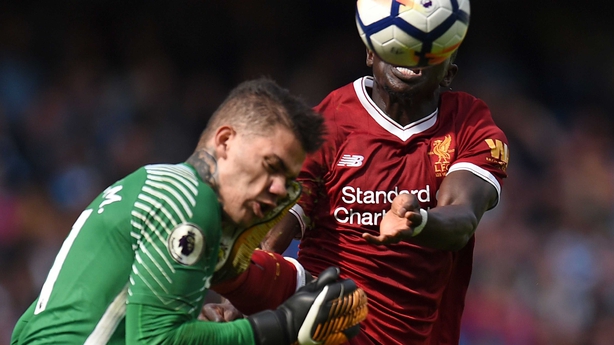 Team-mate John Stones has also been impressed with how Ederson, 24, has dealt with the situation.

Stones, speaking alongside Guardiola at the pre-match press conference, said: "Ederson has got on with it straight away.

"After the game in the changing room he was talking as if nothing had happened. That shows his character.

"He wants to be around the team, in that environment. Everyone has seen his face, the stitches, the swelling - but he's put a scrum cap on and he's been training today."

While Ederson could return, two players who will definitely not feature are Yaya Toure and Vincent Kompany.
Toure was left out of the squad by Guardiola and the manager raised fresh doubts over the veteran midfielder's future by refusing to make public why.

Toure was also dropped at the start of last season, sparking a row between the club and his outspoken agent Dimitri Seluk which led to a longer period of isolation for the Ivorian. That was eventually resolved, with Toure not only winning back his place but doing enough to earn a new contract.

"I spoke with him and he knows the reason why, but it's between him and me," said Guardiola. "It's a 'sportive' decision. Hopefully he'll play soon, but it depends on him."

Kompany did not make the trip having failed to sufficiently overcome the calf injury which ruled him out of the Liverpool game.

Watch Liverpool v Sevilla live on RTÉ 2 from 7pm and online at rte.ie/player. Follow the live blog on rte.ie/sport from 7pm.