James Forrest pinpointed Real Madrid as a preferred Champions League opponent after Celtic progressed into the group stages with an 8-4 aggregate win over Astana on Tuesday night.

The Hoops took a 5-0 win from the first leg of their play-off to Kazakhstan but found themselves 4-1 down in the second-half before late strikes by Olivier Ntcham and Leigh Griffiths confirmed Brendan Rodgers side had made it into the tournament proper for the second successive season.

Pressed afterwards about who he would like to see come out of the hat in Thursday's draw, the Scotland international said: "Obviously we have had Barcelona a couple of times in the last few years so it would be nice to get Real Madrid - but we will see who we get.

"It's going to be six good games to look forward to and the full staff will be buzzing."

In a pulsating encounter at the Astana Arena the Scottish champions suffered their first defeat in 43 games in the 4-3 reverse.

Celtic's 19-year-old defender Kristoffer Ajer, in for the injured Jozo Simunovic, deflected a shot from defender Dmitri Shomko past goalkeeper Craig Gordon in the 26th minute to give the Kazakh side the merest glimmer of hope, quashed, it appeared, eight minutes later when Hoops attacker Scott Sinclair curled in the equaliser. 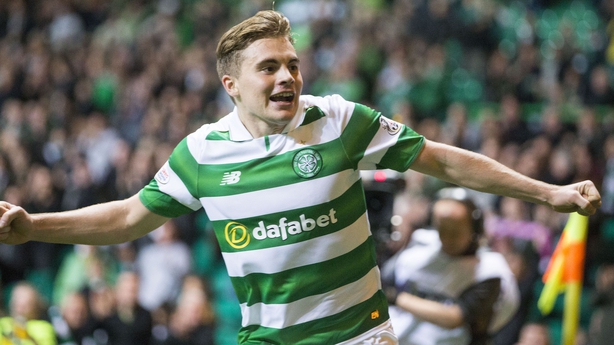 Two goals in a minute at the start of the second-half from attackers Serikzhan Muzhikov and Patrick Twumasi brought the home side back to life and when Ghanaian Twumasi grabbed his second, the visitors were on the ropes before Celtic came back into the game to see it out.

Forrest said: "I thought we did well in the first half and went in at 1-1, then conceded two goals at the start of the second-half and that kind of gave them a wee lift.

"We did it the hard way but we got there in the end.

"Qualification was an aim at the start of the season so we are delighted.

"We know when we play in Europe it is going to be difficult and you need to take your chances more than you do domestically.

"So it is a bit of a wake-up call but we are delighted to be in the Champions League."