The Leesiders started like a team looking to bounce back from Monday’s shock defeat and after only 31 seconds Connor Ellis took a Stephen Dooley pass in his stride and rounded Drogs keeper Stephen McGuinness before firing wide of the target.

A subsequent deflected effort resulted in a third-minute corner kick, from which Shane Griffin’s kick was headed over the bar, but Drogheda survived that early assault and created a great scoring opportunity of their own in the 14th minute.

Jack Bayly made ground on the right and released Shane Elworthy whose cross eventually reached Thomas Byrne and the youngster stroked the ball inches wide from 15 yards.

The visitors upped their intensity after that and Karl Sheppard had a close-range header scrambled off the line by Sean Brennan before Alan Bennett headed wide from the resulting corner.

Drogheda then had a lucky escape on 27 minutes as Sheppard got in behind young Drogheda left-back Conor Kane and his driven cross was turned against the post from close range by Ellis.

But once again the Boynesiders responded impressively and coming up to the break they put together another flowing move that ended with Jake Hyland flashing a long-range effort a yard wide.

Referee Robert Hennessy was kept busy in those latter stages of the first half, though, as he booked four Drogheda players, much to the consternation of the home fans.

Right on the whistle Cork had a chance to edge in front, but Bennett was well off target with his header from a Conor McCormack free kick.

Early in the second half the hosts had a couple of half-opportunities to go in front as Hyland stabbed the ball wide from close range and Kane then blazed over, and they were made to rue their proflicacy in front of goal on 54 minutes when Dooley latched onto an Ellis flick, got in behind the home defence and slipped the ball through the legs of the advancing McGuinness.

The Cork number 11 worked another opening for himself on 63 minutes but this time blazed over the bar, and Drogheda could have made them pay when Bennett climbed on the back of Chris Mulhall and conceded a free kick in a central position just outside the box.

However, Sean Russell was unable to find a way past Mark McNulty as the Cork keeper made a comfortable save.

The game went into a lull after that as both teams emptied their benches, but Drogheda weren’t finished yet and they claimed vociferously for a penalty when Mulhall went down under a challenge from McCormack in the 87th minute.

At the other end substitute Jimmy Keohane rattled the crossbar, but one goal proved enough as a commendable effort from Drogheda went unrewarded, while Cork march on towards the league title. 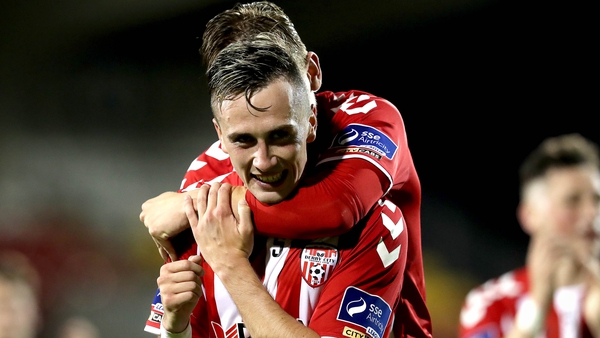