The RTÉ soccer panel had varying opinions following the news today that FIFA has begun disciplinary proceedings into comments made by Republic of Ireland manager Martin O'Neill and winger James McClean.

In a frantic finish at the Aviva Stadium in the World Cup qualifier between the hosts and Austria earlier this month, referee David Fernández Borbalán ruled out what would have been a late winner from Shane Duffy and also waved away appeals for a penalty when Jon Walters went down under a challenge from Stefan Lainer.

O'Neill described the Spanish official as being "very poor", while McClean said he was "Austria's 12th man".

Damien Duff, Richie Sadlier and Didi Hamann all agree that Borbalán got both decisions correct, but differ in what punishment they expect will come the pair’s way.

"Martin O’Neill? I don’t think he said anything untoward. It’s a typical manager’s interview after a game," Duff told viewers, but added that the West Brom winger is likely to face a sanction for his more outspoken views.

"The referee, was he that bad? I don’t know, I have seen worse, and that’s from a passionate Irish man. There was a lot said about the ref, but we didn’t play that great on the day."

The former Chelsea and Newcastle winger suggested that a fine might be the outcome, adding that the FAI Chief Executive John Delaney could foot the bill

"Hopefully nothing will come of it, it’s just a fine and let JD [John Delaney] pay for it."

Damien Duff reckons John Delaney should pay any fine that comes the way of Martin O'Neill or James McClean from FIFA #rtesoccer pic.twitter.com/W6MpPIBl1i

Sadlier said he could see why FIFA might take umbrage with McClean’s interview, but argued that O’Neill didn’t challenge the referee’s impartiality in his views.

"James McClean, in mentioning the 12th man, you’re implying he is a member of the opposition, so you could see that. But I don’t think either of them were strong enough to warrant whatever punishment is coming," he said.

"I think they were bland enough statements in the heat of the moment."

Former German international Hamann doesn’t foresee McClean escaping the charge, and agreed with his colleagues that the match official got the key decisions correct on the day.

"I’m not sure if a fine is sufficient for the comment he has made," he said, but feels the FAI should have sent out a different player for the immediate post-match interview.

"I don’t understand the people in charge of the FAI, how they can send James McClean, who we know is a hot head, to an interview 20 seconds after the final whistle when emotions are running high," he said.

Hamann was told that RTÉ requested the interview, but argued that in such circumstances, the player’s welfare should be the priority.

"Good on the FAI to give him to us, but at the same time, you have got to protect the player." 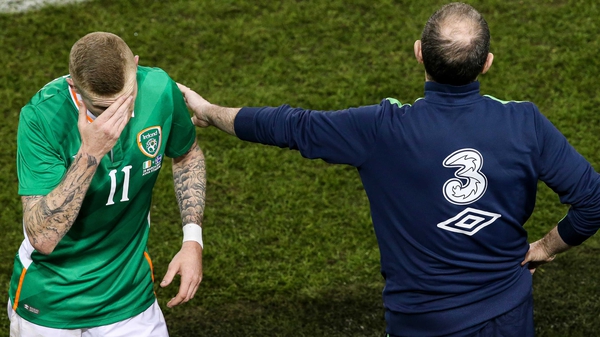