FIFA president Gianni Infantino has said world football's governing body will review the rules related to agents in response to the "perception" the transfer system is broken.

The development comes in the week FIFA confirmed it has asked for more information about Paul Pogba's £89m transfer from Juventus to Manchester United last summer.

The French midfielder's return to Old Trafford has dominated headlines in the UK and abroad since details of that transfer and his 2012 move to Italy surfaced.

Extracts from a forthcoming book called 'Football Leaks: The Dirty Business of Football' have appeared in newspapers throughout Europe this week and have claimed that Pogba's agent Mino Raiola will earn £41m from the United deal.

The book, which has been written by two journalists from German newspaper Der Spiegel, alleges the Italian-born, Dutch-based agent will receive payments for acting for the buying and selling club, as well as the player.

When asked about the Pogba transfer after the 67th FIFA Congress in Bahrain, Infantino (pictured below) said the sums of money involved in the global transfer system were "huge" and that created a "perception". 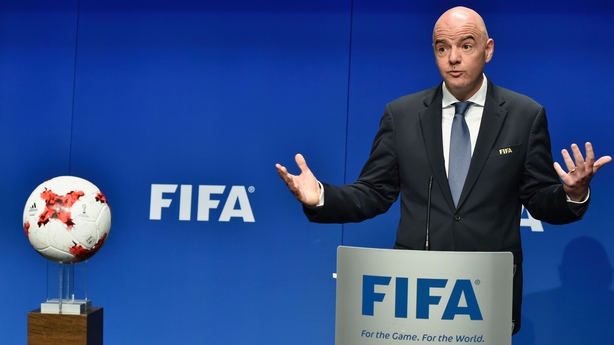 He said: "The same as FIFA wants to be transparent in our accounts, I think it's also a duty for the clubs, the agents and all those who are serious, that maybe we can come to some better way of dealing with this. How we'll decide for this to happen and when it will happen, I don't know."

The 47-year-old Swiss-Italian then explained he had helped set up the current international transfer rules when he worked for European governing body UEFA.

Those rules, which were the result of negotiations between the European Commission and UEFA, have lasted since 2001.

"I think after 15 years or more we need to look at it," said Infantino.

"We need to look at transfers, transfer sums, the agents, because a couple of years ago FIFA decided basically to get rid of the agent regulations and we've had some mixed feedback to that.

"So sometimes you have to look seriously at matters again and see if you can find better ways of dealing with them."

In 2015, FIFA stopped regulating football agents and left it up to each member association to police the system.

"Sometimes you have to look seriously at matters again and see if you can find better ways of dealing with them." - Gianni Infantino

This light-touch approach has been criticised in several countries and only this week the association of Italian football agents has asked a court in Rome to impose tighter rules on who can represent players.

Manchester United have denied any wrongdoing in the Pogba transfer and appear to be relaxed about FIFA's interest in the move.

Raiola has not commented on the recent claims about his earnings - he also represents Pogba's Manchester United team-mates Zlatan Ibrahimovic and Henrikh Mkhitaryan - but has defended himself in previous newspaper interviews.

But there is clearly some momentum for a review of how agents earn their money and the sums involved.

Speaking to the BBC in Bahrain, FA chairman Greg Clarke said it was up to Manchester United how much they spent on players and agents but perhaps it was something that could be discussed by all parties in the professional game.

Clarke said: "Picking on one transfer and demonising it is not that helpful - knee-jerk reactions don't often yield good outcomes.

"What we want is some thought about how much money stays in the game so it can be invested in long-term productive things."