Sergio Aguero roared back into action for Manchester City, playinga  crucial role in the second goal and helping them move into second position in the table with a crucial 2-0 win at struggling Bournemouth.

The striker, whose future has been the subject of growing speculation since he lost his starting place to Gabriel Jesus, came off the bench to replace the injured Brazilian and forced defender Tyrone Mings into turning into his own net after Raheem Sterling had given them the lead.

In his pursuit of a first victory of 2017, 14th-placed Bournemouth's manager Eddie Howe recalled £15million club-record signing Jordon Ibe, handing the winger his first league start since their home defeat to Sunderland on November 5.

There were also recalls for Charlie Daniels and Adam Smith, and his team's reaction was to begin with a belief that belied their poor form.

The promising combination of Smith and Ibe created the Cherries' first sight on goal in the 19th minute.

After Smith ran down the right wing and found his team-mate, Ibe played a one-two with Jack Wilshere to bypass Fernandinho before attempting to round goalkeeper Willy Caballero, who dispossessed him with his outstretched right foot.

City - who had retained the front three of Leroy Sane, Sterling and Jesus and started Fernandinho in the unfamiliar position of left-back - began with similar intent.

The classy David Silva was again orchestrating much of their play, and after he sent Sane clear on the left wing, the German cut the ball back towards Sterling, whose shot towards the bottom left corner was blocked by Steve Cook. The rebound fell straight to Kevin de Bruyne and the Belgian also shot goalwards - but Daniels blocked again. 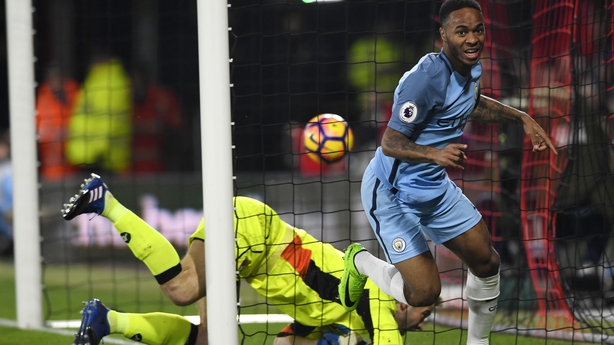 In the 29th minute, after Yaya Toure had curled an effort just wide of the left post, Silva played a similar through-ball to Sane, who again looked for Sterling with a similar cross. This time Cook deflected possession to Sterling, who routinely side-footed in at the far right post.

Bournemouth's response was almost instant. Another powerful run down the right from Ibe took the winger past Fernandinho and into space to send a low cross towards Joshua King.

In space from directly in front of goal, the former Manchester United forward sent the ball beyond Caballero - but the effort was ruled out by referee Neil Swarbrick, perhaps harshly, after he appeared to pull back John Stones before receiving possession.

By that point Jesus had already been replaced by Aguero, owing to a suspected foot injury, and Bournemouth had substituted Francis for Tyrone Mings after he appeared to have injured his right hamstring.

But the hosts then losing Jack Wilshere to a suspected ankle problem, on the stroke of half-time and when Benik Afobe was brought on, was the most influential development.

In Wilshere's absence, the movement and vision that at times threatened City declined, and left them with little response after the visitors doubled their lead in the 69th minute.

Fernandinho ran down the left before feeding Sterling, who under pressure brilliantly cut into Bournemouth's area before squaring back in front of goal to Aguero. The Argentinian's contact appeared to be sending the ball goalbound - but Mings got a touch which made sure.

As City continued to attack, Sane struck the crossbar after creating space, and goalkeeper Artur Boruc tipped a Silva shot onto post - but a third goal eluded them. 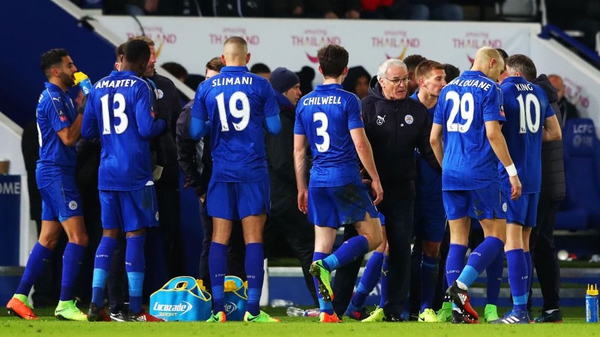