Celtic concluded their International Champions Cup campaign with a 2-0 defeat to Inter Milan at Thomond Park in Limerick.

The Hoops, who announced the signing of goalkeeper Dorus de Vries from Nottingham Forest just before the game, lost to goals from Eder and Antonio Candreva.

Defeats against Leicester and Barcelona left Brendan Rodgers' side with nothing but pride left to play for in their final game of the tournament and with next week's Champions League qualifying clash against Hapoel Be'er Sheva in mind the Celtic boss named an almost entirely different team to the one that comfortably beat Motherwell during the week.

Only Saidy Janko and Emilio Izaguirre retained their places in a largely second-string line up.

The Scottish champions would have been behind early on had Leonardo Fasan not showed good agility to help Benaga's 20-yard effort over the crossbar before parrying away a fiercely-struck Ivan Perisic shot.

In between, the fit-again Dedryck Boyata clipped a shot against the Inter crossbar.

It was end-to-end action and Stefan Johansen cleared off his own line from Andrea Ranocchia's glancing header before Samir Handanovic saved with his legs when one-on-one with Stuart Armstrong.

Fasan then denied Geoffrey Kondogbia just after the half hour but the Italian was eventually beaten as half-time approached when Perisic flicked a lovely header back across goal from a corner and Eder simply turned the ball in from close range.

Celtic responded well to the setback and began the second half brightly. Efe Ambrose looped a header just over and on the hour mark Nadir Ciftci thumped a volley against the crossbar.

It was to no avail, though, and in the 71st minute Inter hit Rodgers' side on the counter attack to extend their lead. Candreva latched on to a lovely through ball from Mauro Icardi before beating Fasan with a perfectly-weighted chip.

It was the cue for Inter to sit deep and defend what they had and they restricted Celtic to a couple of long-range efforts from Ryan Christie and another from Stuart Armstrong.

It was another defeat but Rodgers will at least have a better idea of what his fringe players will be able to provide should they be called up on over the course of the season, with Christie particularly impressive on the night. 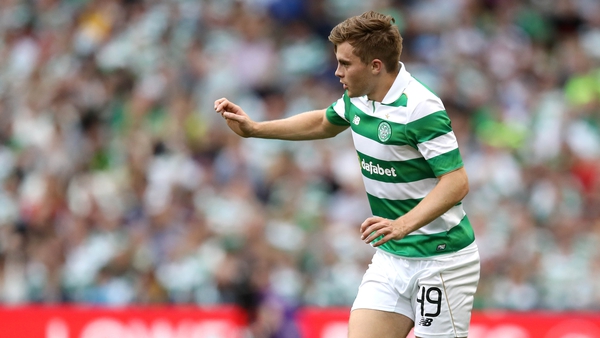