Former Ireland coach Eddie O’Sullivan believes the only hope of a historic victory on South African soil is by moving the ball wide and avoiding the physically imposing Springboks.

Joe Schmidt has said that expectations have not been lowered ahead of the daunting three-Test tour despite being shorn of the services of Johnny Sexton, Luke Fitzgerald, Rob and Dave Kearney, with Tommy Bowe, Josh van der Flier, Peter O'Mahony, Sean O'Brien and Simon Zebo previously ruled out.

Ireland will take on the Boks in Cape Town on 11 June, followed a week later by game two at altitude in Johannesburg before concluding the tour in Port Elizabeth and O’Sullivan told 2fm’s Game On that he believes an expansive game plan is the only way of causing an upset.

“I have been involved against South Africa five times in total,” he said.

“We always tried not to confront South Africa head on because they are a colossal team.

Connacht’s attacking philosophy bore fruit when they claimed the Guinness Pro12 in style, and with Tiernan O’Halloran and Matt Healy called in as replacements, and they could pose questions in defence for new South Africa coach Allister Coetzee.

“You have got to move them around,” he insisted.

“You are in a boxing match and the guy is a weight class above you. If you go toe-to-toe it’s not going to be pretty or fun.

“You have to try different things.”

It will be the first time Ireland will tour South Africa in 12 years. 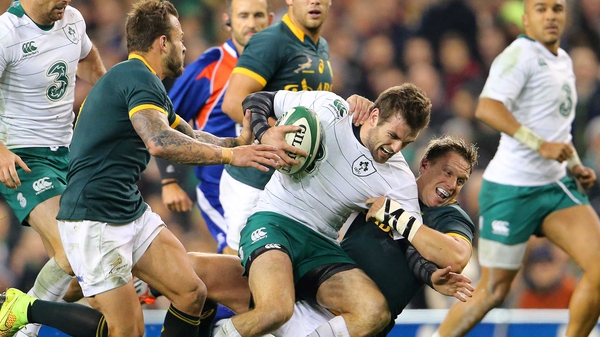