There was a carnival atmosphere at Oriel Park before a ball was kicked with Dundalk’s Family Fun Day promotion enhanced by the return of former Lilywhite hero, Richie Towell, who collected a spate of honours at half-time for his part in Dundalk’s double winning season last year.

Dundalk’s home games this season have proved to be tight, often drab affairs, but this was anything but. Wexford, quite bravely, opted to fight fire with fire and it made for a cracking first half of football.

Sixty two seconds had elapsed when Wexford skipper Graham Doyle was employed for the first time. Daryl Horgan’s cross from the left fell kindly for John Mountney but Doyle made a fantastic save to keep the powerful half volley out.

Lilywhites goalkeeper Gary Rogers returned to the bread and butter of domestic football after featuring on the bench for the Republic of Ireland in Friday night’s international friendly with Holland but he was beaten in the 12th minute when Paul Murphy took control and let fly from 25-yards, his effort beating Rogers, who will perhaps feel he should have done better.

The Meathman was back to his very best five minutes later, getting a strong hand on the ball to deny John Bonner’s stunning free kick from finding the top left hand corner of his net.

The champions restored parity in the 24th minute later. Ronan Finn’s cross sought out David McMillan and when his attempted diving header was blocked, the ball fell perfectly for Horgan to steer home.

Robbie Benson then saw a right footed effort kiss the outside of the post and trickle wide.

It was the visitors who regained the lead in the 57th minute when Eric Molloy overpowered Meenan to beat Rogers at his near post.

Dundalk pushed for another equaliser and Horgan floated a free over the top before Youths defender Ryan Delaney was fortunate to see a header clear his own crossbar with Doyle well beaten.

Kenny threw skipper Stephen O’Donnell into the fray and he had a major part in Dundalk’s second goal. His cracking 25-yard volley was brilliantly saved by Doyle but the Youths goalkeeper was left flailing from the corner, as Meenan viciously curled the ball directly into the net from the left.

Doyle saved from McEleney in the 86th minute and it looked like the points would be shared but the former Derry City star took control of a quick free kick to slot the ball home in the 93rd minute and maintain Dundalk’s four point lead over Cork City ahead of their meeting this Friday at Turner’s Cross. 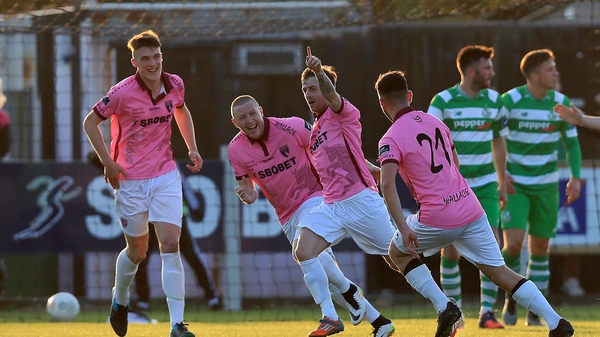