Crisp finishes from Andy Mulligan and Chris Kenny earned Wexford Youths arguably the biggest win in their history as they accounted for Shamrock Rovers on a 2-0 scoreline in the SSE Airtricity League Premier Division at Ferrycarrig Park.

And, let there be no mistake, it was a fully-deserved victory as Shane Keegan’s side also made it back-to-back wins for the first time in the top flight to move up to ninth.

While Shamrock Rovers remained unchanged from Tuesday’s 3-0 win over Sligo Rovers, the home side were without their joint-top scorer Danny Furlong, who suffered a hamstring strain in their rousing win at Longford Town in midweek.

It was Rovers, in their first league game at the venue, who started on the front foot with Gavin Brennan having an early header from a Brandon Miele delivery blocked by a defender in a crowded goalmouth.

The visitors then had a sixth-minute shout for a penalty for handball against Gary Delaney from a Dean Clarke cross ignored by Clare referee Padraigh Sutton.

Rovers bright start mattered not, though, as it was Youths who had the first real chance of the game on 10 minutes before taking the lead nine minutes later.

Rovers' defender Dave Webster’s clearance was charged down by the alert Eric Molloy to put the Youths winger through on goal. But, with only Craig Hyland to beat, Molloy flicked his shot wide when he should have given his side the lead.

In an open game, a minute later Youths keeper Graham Doyle was forced into the first save of the night, getting down to his right to push away a volley from Rovers captain Gary McCabe after he’d run through onto Gavin Brennan’s diagonal ball.

But further poor defending by Rovers was punished as Youths took the lead.

Gary Shaw was inexplicably caught in possession by Gary Delaney whose cross was swept home by winger Mulligan for his third goal in four games.

Shaw came close to making amends for his error three minutes later. Doyle was equal to his thumping drive from distance, though, batting the shot out for a corner.

The errors kept coming at the back for Rovers, however, as Gavin Brennan this time was robbed by Molloy who again lacked composure as his shot was off target.

Rovers pressed to get back into the game for the remainder of the half, with Rob Cornwall heading wide from a Killian Brennan free-kick before Clarke cut in from the left to drill a shot off target.

A bright start to the second half by Pat Fenlon’s side only resulted in Rovers almost falling further behind to a swift counterattack five minutes in.

The hard-running Murphy broke on the right to set up Molloy, who drove his shot narrowly wide.

The frustration was mounting for Rovers, exemplified on 57 minutes when Killian Brennan sent a free-kick an incredible distance over the bar.

When they did find the target, Doyle was there to thwart shots from distance from McCabe and then Miele as Rovers continued to press.

But it was Youths who struck to double their lead on 70 minutes to seal the win.

Murphy worked the ball to Shane Dunne on the right and his low cross was met by Kenny, who found the far corner of Hyland's net with a low shot. 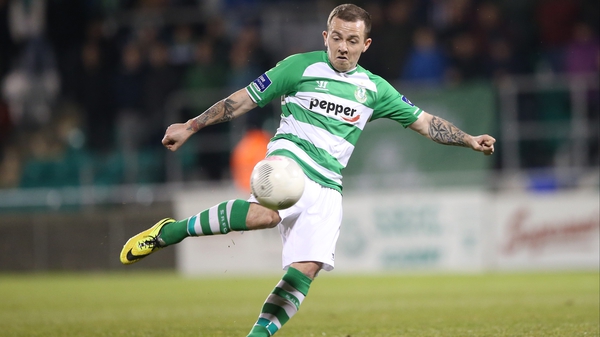 Hoops beat Sligo in battle of the Rovers