Republic of Ireland women’s head coach Sue Ronan has named her 21-player squad for the upcoming EURO 2017 qualifiers against Finland and Montenegro.

Ireland are away to Finland on 3 June followed by the visit of Montenegro to Tallaght Stadium four days later.

With Spain assured of the automatic qualification spot after winning their first six games, Ireland are battling it out with the Finns for second place, which would guarantee at least a play-off place.

Finland are three points ahead of the Irish with a game in hand so anything other than a victory in Valkeakoski would severely damage Ireland's chances. Montenegro have lost all their games to date.

“Right now all the focus is on Finland because it’s the first game, and therefore the most important.  But we are at the stage in the group where we can’t afford any more slip-ups, so maximum points from these two games is the target," said Ronan.

"I have named a squad of 21 players, although Karen Duggan is unavailable for the first game due to suspension.

"She was recently voted Continental Tyres Women’s National League Player of the Year by her peers, which shows how much she has progressed in the last 12 months and the form she’s in, so she will be a huge loss to us.

"Jessica Gleeson also misses out due to an injury picked up last weekend playing for Wexford Youths, but I’ve replaced her with team-mate Lauren Dwyer, who had a superb game in the league decider and has been consistently good over the last few months for Youths.”

“We welcome back Megan Connolly who was unavailable for the last camp due to college commitments in the USA.  Also returning is Savannah McCarthy, who’s participation in the Under 19’s Elite Phase prevented her being involved last time out."

Ronan has targeted the Finland game since their opening-day 2-0 defeat in Dublin to the same opposition.

“The home fixture against Finland was the first game of the campaign so to get off to a bad start was a big disappointment for everyone involved," she said.

"When we analysed that game, we all agreed that we didn’t do ourselves justice on the night, we had created some really good chances to score but didn’t take them, then conceded two soft goals. But ever since we have been looking forward to the away fixture knowing we had to win to stay in the group.

"And while the players took confidence from our victory over Finland in the Cyprus Cup earlier this year, they also know that a friendly tournament is different from a competitive game, so will not underestimate them in any way.”

The club form of players in the squad has been encouraging in the lead up to the games.

As well as Karen Duggan being named Continental WNL Player of the Year, Aine O’Gorman claimed the Golden Boot and Meabh De Burca made the Team of the Season alongside them.

In England, Niamh Fahey was also named in the Team of the Season, while Emma Byrne and Katie McCabe were part of the Arsenal Ladies’ squad that won the FA Cup.

Last month, Denise O’Sullivan made her debut in the USA for Houston Dash and has already opened her goal-scoring account. 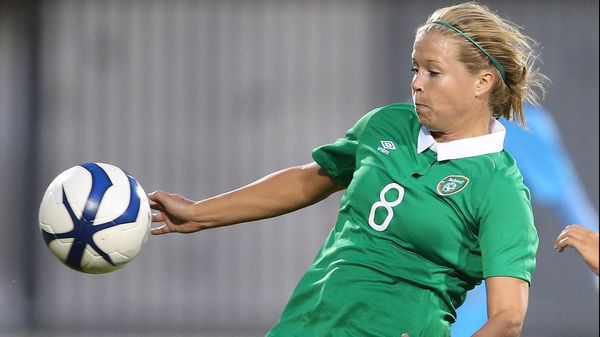