The Republic of Ireland senior women got back to winning ways in their Euro 2017 qualifying campaign after a 5-0 thrashing of Montenegro in Petrovac.

Goals from Louise Quinn, Aine O'Gorman and a penalty from Ruesha Littlejohn gave Ireland a 3-0 half-time lead, while Denise O'Sullivan and Stephanie Roche added to the joy in the second half.

The Republic next face Group 2 leaders Spain in Madrid on Tuesday and will hope to avenge the 3-0 loss from last November.

Ireland's only win heading into Thursday's match had come last October against Portugal, Quinn and O'Gorman scoring in a 2-1 win.

Both players started in Petrovac, while captain and goalkeeper Emma Byrne was making her 125th appearance for the national side, and it proved the perfect start as Quinn got on the scoresheet in only the third minute, heading in at the far post following a short corner.

That lead was doubled on 24 minutes by O'Gorman, who was then upended in the box a minute later with Littlejohn successfully converting from the penalty spot.

Ireland continued to threaten after the break, with Montenegro goalkeeper Jovana Bajcetic called into action several times, and the persistence paid off on 73 minutes when O'Sullivan's quick feet allowed her to drill home.

Byrne then did well to save from Montenegro's Sladjana Bulatovic, before Roche completed the win with a header to match Julie Ann-Russell's cross on 84 minutes. 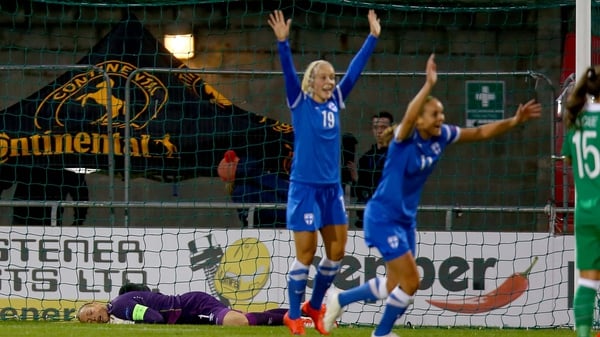