The win, in a game brought forward to facilitate St Patrick’s Europa League involvement, sees Liam Buckley’s fifth-placed Saints move to within a point of Shamrock Rovers and Derry City, though now with a game more played.

Harps, reeling from their record 7-0 league annihilation by Dundalk on Friday, could have done without having to follow that up with travelling to the scene of their record-equalling FAI Cup defeat, a 6-1 loss to St Patrick’s in the semi-final two years ago.

Injury- and suspension-hit St Pat’s made five changes to the side that lined up in their rollercoaster 3-3 draw with Longford Town on Friday night, with 19-year-old Rory Feely coming in to their central defence for a first league start, but Harps made just two from their mauling by Dundalk.

Starting in the hole behind Jamie McGrath, rather than his regular role on the left wing, Dennehy fired wide when put in on goal from Graham Kelly’s pass to signal St Pat’s intent inside 70 seconds.

Five minutes later the home side were in on goal again. McGrath treaded a ball through for Sam Verdon, but the young midfielder’s angled drive flew into the side netting.

Maintaining their bright start, the Inchicore side did take a deserved lead on nine minutes as they carved Harps open again.

Dennehy sent Byrne away on the right and the winger’s end-line cross was volleyed home from close range by Donegal native Timlin.

Harps almost hit back within a minute with their first attack of the game as Saints keeper Brendan Clarke had to touch Tony McNamee’s shot out for a corner.

Back at the other end, McGrath sliced wide soon after from Kelly’s free-kick before the game died somewhat until three minutes before half-time when St Patrick’s doubled their lead.

Having been found on the right by Lee Desmond’s ball, Byrne surged between two defenders to unleash a left-foot drive that Ciaran Gallagher got a touch to but couldn’t keep out.

In a less eventful second half, Dennehy added St Patrick’s third goal on 69 minutes, running through from Timlin's pass to side-foot confidently past Gallagher.

Timlin completed the scoring three minutes from time when finishing after neat approach play from McGrath and substitute Dylan McGlade for his fifth league goal of the season. 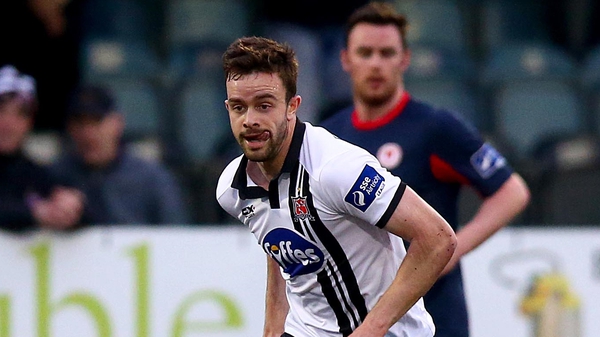 Dundalk show no mercy to put seven past Finn Harps