Dundalk maintained their four point lead at the top of the SSE Airtricity League Premier Division as they hammered a sorry Finn Harps 7-0 at Finn Park.

Both Robbie Benson and David McMillan claimed a brace each while Daryl Horgan, Andy Boyle and Paddy Barrett were on the score sheet as the Louth men registered their seventh league win on the trot. The result was also the Donegal side's worst ever league defeat.

The champions made the trip to the north west in search of their first Finn Park victory since November 2006, when both teams occupied the First Division. It was clear they would bridge that gap from as early on as the fifth minute. Playmaker Benson set Dundalk on their way as he made the most of a defensive lapse in the Harps penalty area to nod Sean Gannon's cross past Ciaran Gallagher for his first goal for the club since his move from UCD.

Stunned by this, the home side struggled to deal with the early waves of Lilywhite attacks. John Mountney volleyed wide from the edge of the area on eight minutes after Damien McNulty's clearance landed at the feet of the Mayo man. While the unmarked Brian Gartland saw his headed attempt land narrowly wide of Gallagher's back post from Horgan's corner three minutes later.

The Oriel Park outfit displayed their dominance by doubling their lead on 20 as Benson bagged his brace. Mountney did well to control Horgan's cross from the left before teeing up Benson, who from ten yards, saw his shot on the turn arrow into the top corner of the Harps net for his second.

Stephen Kenny's charges enjoyed a 3-0 win over Harps earlier this season and they matched that score on 36. Horgan found himself in ample space in front of the Harps back four and from 30 yards unleashed an unstoppable bending shot which looped over Gallagher and into the bottom corner of the net.

The league leaders netted their fourth a minute from the break. McNulty was no match for the pace of Horgan whose cross from the left caused panic in the Harps area. The lively Finn was first to the ball and his goalward shot was bundled past Gallagher by McMillan who managed to force the ball under Gallagher's body from close range for his sixth of the season.

Benson was a hair's breadth away from securing his hat-trick five minutes into the second half, as his wickedly driven volley from 20 yards kissed the Harps crossbar on its way over. 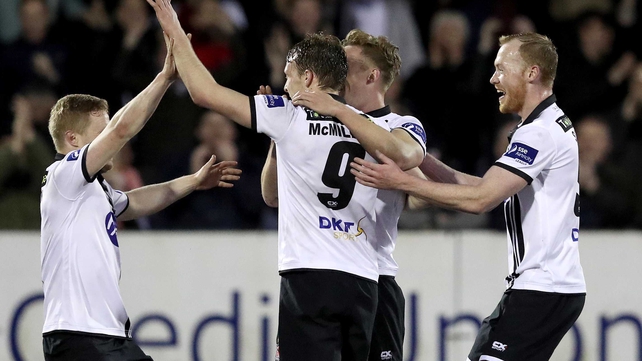 Four became five on 56 as McMillan netted his second. The former Sligo striker capitalised on a mistake from Packie Mailey before turning the centre half and finding the corner of the net from a central position in front of the Harps goal.

Sean Houston almost grabbed what would have been a consolation for the home side on 67. The midfielder unable to direct Adam Hanlon's corner past Gary Rogers at the back post.

Boyle showed Houston how it's done on 72 when the Dundalk captain rose above his marker to nod substitute Darren Meenan's corner inside the post for his team's sixth of the night.

Barrett completed the rout two minutes into injury time at the end of the game. The 59th minute substitute taking a touch past Keith Cowan before neatly tucking the ball beyond the hapless Gallagher. 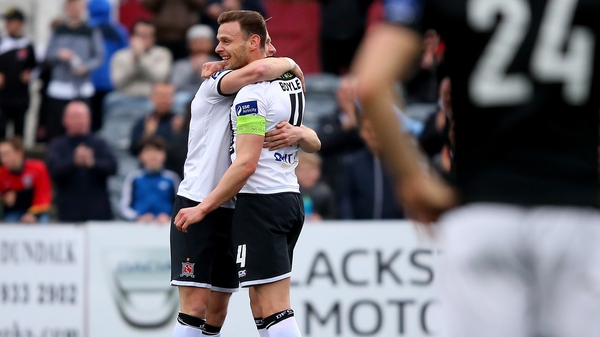 Dundalk grind out victory over Bray