Zlatan Ibrahimovic declared he will leave Paris St Germain "like a legend" after confirming he will not stay with the Ligue 1 champions beyond the current season.

The 34-year-old Swede is out of contract this summer and there has been speculation all season over what his next move would be. A post on his Twitter account on Friday morning at least made clear that he was nearing the end of his time with PSG.

Ibrahimovic, who has been linked with several English clubs including Manchester United and Arsenal, is expected to play his last game for PSG when they face Marseille in the Coupe de France final at the Stade de France on May 21, with the club completing their Ligue 1 campaign against Nantes this Saturday.

PSG boss Laurent Blanc had retained hope that his talisman would agree another deal, but Ibrahimovic decided the time was right to move on.

"My last game tomorrow at Parc des Princes. I came like a king, left like a legend," Ibrahimovic wrote on the social media site.

PSG confirmed the decision themselves later on Friday morning via the club's offical website, with statements from both player and club suggesting it was an amicable parting.

"I am very proud of these last four years. I loved every single day I spent here. PSG have become in these last years an internationally shining, star club and I have played a major part in this transformation," said

My last game tomorrow at Parc des Princes. I came like a king, left like a legend pic.twitter.com/OpLL3wzKh0

Ibrahimovic, who has scored 46 goals in all competitions this term and is the club's all-time top scorer with 152 goals since joining from AC Milan in July 2012.

"The time has now come for me to take a new road. I want to thank my colleagues, the staff and everyone at the club," he added.

"My heart is with the fans. They have been fantastic since the day of my arrival. They are the best fans in France.

"This is not farewell, just goodbye. I came here as a king and I leave as a legend. But I will be back!"

PSG's statement suggested the club would look to help Ibrahimovic into management when he eventually hangs up his boots.

"Following discussions between Paris St Germain and the agent of Zlatan Ibrahimovic, the club and player have mutually decided not to renew the contract between the two parties after June 30, 2016," the statement on www.psg.fr read.

"They also agreed that once his playing career ended, Ibra will join the management of the club in a senior position.

"Paris St Germain will forever be deeply grateful to Zlatan for the extraordinary seasons which made him the highest scorer and one of the greatest players in the history of the club.

"Ibra will be instrumental in transforming Paris St Germain into one of the biggest clubs in Europe."

As well as a possible first stint in England, a return to AC Milan is also said to be under consideration along with a move to Major League Soccer with the Los Angeles Galaxy. 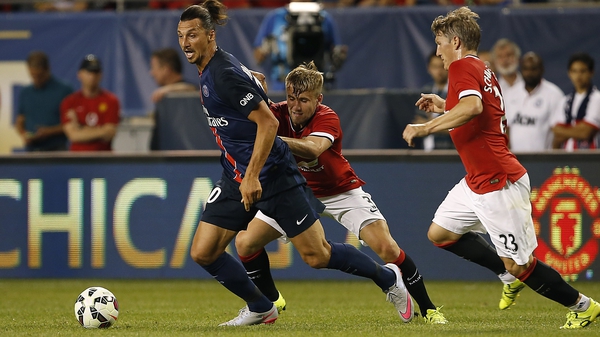