Leicester City are the 2015-16 Premier League winners after tonight's 2-2 draw between Chelsea and Tottenham at Stamford Bridge left the Foxes in an unassailable position at the top of the table with two games to go.

Leicester, on 77 points can't be caught by Tottenham, who lie on 70 points.

After their Houdini to survive in the England's top flight at the end of last season, the East Midlands club continued on the upward trajectory, losing only three games this term and you have to say they are deserving winners.

Leicester City will take their place as top seeds in next season's Champions League.

Jamie Vardy had a party 🎉
We were there 🙋 #havingapartyhttps://t.co/aaNmYBeafF

Second-half goals from Gary Cahill and Eden Hazard were enough to finally down second-placed Spurs' charge but the night, and season, belongs to Leicester and their Italian manager Claudio Ranieri.

Ranked as 5,000-1 outsiders at the start of the campaign, doubts were raised over whether Ranieri could stave off a battle against the drop when he was appointed as Nigel Pearson's successor on 13 July

Now, 294 days later, he had the luxury of jetting back home to Rome to have lunch with his 96-year-old mother before returning to the East Midlands a hero.

The 64-year-old, though, was far from the only knight in shining armour at the King Power Stadium this term.
Some of Leicester's unlikely stars were watching events unfold at striker Jamie Vardy's house on an evening of high drama.

Foxes fans have coined the 'Jamie Vardy's having a party' chant this season, and the England striker appeared to be actually throwing one at his Melton Mowbray home.

Unbelievable achievement. Well deserved. Shows you how far you can go! No dream is too big. Congrats @lcfc 🏆 pic.twitter.com/HZyj6YUGXF

Pictures from the Daily Mail appeared to show a number of players such as Christian Fuchs, Robert Huth, Wes Morgan and Shinji Okazaki arrive at Vardy's home, while a number of supporters also gathered outside the gates of the house.

Vardy began his senior career at Stocksbridge Park Steels after being rejected by Sheffield Wednesday as a teenager and was playing non-league football for Fleetwood in 2012.

The 29-year-old, who claimed the Football Writers' Association player of the year award on Sunday, has gone on to score 24 goals for club and country this season and looks set to lead the line for England at Euro 2016.

Riyad Mahrez's 17 goals and 11 assists saw him crowned PFA player of the year, capping the Algerian's astonishing accent from the French second division as recently as 2014.

Goalkeeper Kasper Schmeichel, defenders Morgan and Danny Simpson and midfielders N'Golo Kante and Danny Drinkwater were also recognised by the voters in the FWA poll. 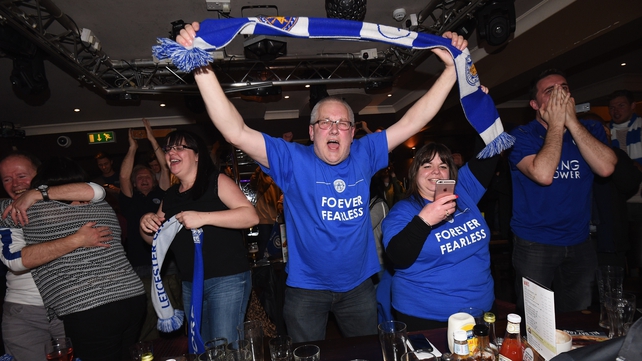 Winger Marc Albrighton, speaking after Sunday's 1-1 draw against Manchester United at Old Trafford which edged the Foxes closer to their first-ever top-flight title, said: "We've got that never-say-die attitude. I think that's won us a lot of points this season.

"Early on this season you've got the draws at Stoke and Southampton, we were 2-0 down in both of them, and 2-0 down in the home game against Villa.

"So that showed our character early in the season and we've continued to do that. We've gone behind at Old Trafford, which is a daunting place. It's a big pitch and the fans are behind them, but credit to the lads, we carried on going, got the equaliser and held on."

Leicester lost 19 games in last season's bid to escape relegation yet, under Ranieri, they have tasted defeat just three times in the Premier League.

They have gone to Manchester City and Tottenham and won, while an unbeaten run since mid-February proved beyond any doubt Ranieri's side had the nerve to finish the job.

Albrighton admitted after the thrilling draw with United that a title success would take time to register.

"I don't think it will for a while," the former Aston Villa winger added. "It might sink in later on in the summer. If we can wrap up the title it will be such a fantastic achievement and maybe then it will sink in."

Seven years ago, to the day, after the Foxes rounded off their League One title-winning campaign with a 3-0 win away at Crewe, they can now savour the proudest moment in the club's history. 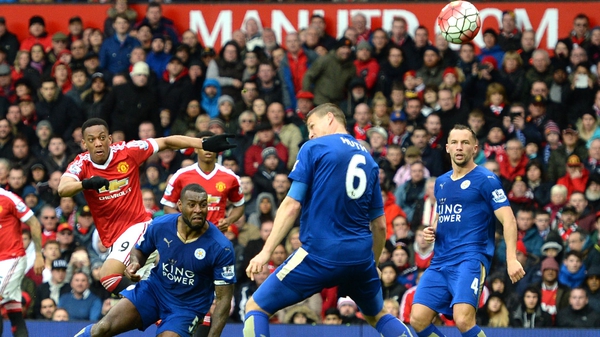