Leicester's title celebrations were put on hold as they were forced to cling on with 10 men for a 1-1 draw at Manchester United.

The Premier League leaders responded to Anthony Martial's early strike at Old Trafford through captain Wes Morgan but it was not enough to complete the unlikeliest of title successes.

They were left living on their nerves in the closing minutes after Danny Drinkwater was sent off for a second bookable offence when he brought down Memphis Depay just outside the area.

In the end they were probably relieved to reach the final whistle and claim a point that inches them closer to a fairytale that could still be realised on Monday if Tottenham do not beat Chelsea.

Failing that, Claudio Ranieri's men could finish the job on their next outing, back at the King Power Stadium, against Everton.

The Foxes' failure to seal the deal with two games to spare was not for the want of trying. It was only after Drinkwater's 86th-minute dismissal that it began to look like a draw was a satisfactory outcome.

United, who were also anxious for points in their battle for fourth place, were never in the mood to oblige them or their buoyant fans.

The opening half hour was a frenetic affair as Leicester made an unusually - but understandably - nervy start.

It came as no surprise they were breached early, as Marcus Rashford had already seen a shot blocked, when Martial arrived unmarked to sweep an Antonio Valencia cross under Kasper Schmeichel after eight minutes.

It was only the third goal the normally rocksteady Foxes had conceded in eight games and it needed a fine save from Schmeichel to deny Jesse Lingard and prevent it getting worse.

Leicester needed to regroup but did so successfully with Morgan getting away from the erratic Marcos Rojo to reach a Drinkwater free-kick and head a 17th-minute equaliser. 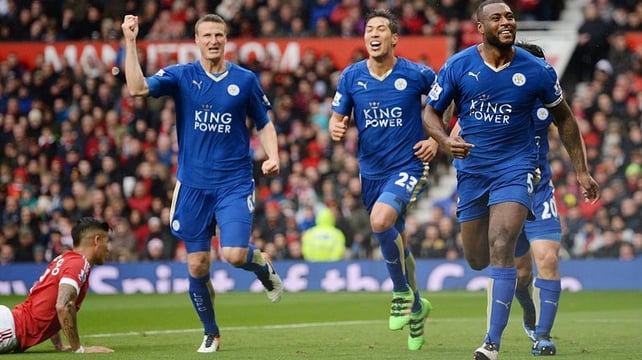 Attention then switched to referee Michael Oliver and a series of big decisions which could have had a significant bearing on the game.

Firstly Lingard seized on poor control by Danny Simpson and threatened to race clear, only to be dragged back by the Leicester defender. Lingard went down but Oliver did not deem contact strong enough to constitute a foul, much to the relief of Simpson, who on another day might have been sent off.

There was then controversy at the other end as Riyad Mahrez wrong-footed and then collided with Rojo in the penalty area, but again nothing was given.

United midfielder Marouane Fellaini might also have been lucky to escape punishment after appearing to catch Robert Huth with a flailing arm following a tussle that involved the Leicester defender pulling the Belgian's hair.

The Foxes upped the tempo at the start of the second half. Simpson found space and had a cross deflected just out of Shinji Okazaki's reach before Leonardo Ulloa headed the resulting corner over.

Ulloa had another good effort deflected wide. United came back into the game as time ticked away and Chris Smalling went close with a firm header that struck the outside of the post.

Hearts were then in mouths when substitute Memphis went down after contact by Drinkwater on the edge of the area.

Leicester were relieved no penalty was given, with a free-kick awarded just outside, but the red card made for anxious times in the closing minutes.

Ranieri believes the point will prove valuable after seeing his side go behind after 15 minutes. 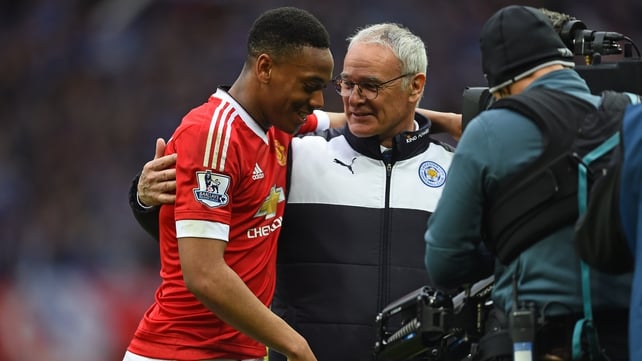 "The performance was good after the first 15 minutes before our goal. We were a little scared as United started really well, like the big, big teams they moved the ball very well," the Italian said on Sky Sports 1.

"It was very difficult for us at the start. After our goal we played better and I think the draw is the right result."

The Leicester boss also stated that he will miss the Tottenham match at Chelsea on Monday night due to a flight back to Italy in the morning.

"Now I go back to Italy, tomorrow I come back at 7.0pm and then I don't watch the match."

Morgan was quick to dismiss his side having one hand on the Premier League trophy. "No, it's not ours until we have both hands on the trophy," he said.

"But we'll be watching tomorrow night and maybe it will be our day."

Manchester United boss Louis van Gaal felt that his side's performance was their best of the season.

"I think this was the best performance of the season because we have created a lot of chances, we have to score but we didn't. They score from a set-play and they are very dangerous. But still we let them score.

"It was a very difficult match. Nowadays you cannot control these matches by yourself as a referee. When you see what [Robert] Huth is doing with Fellaini, that's a penalty.

"What will you do if your hair is being pulled? I think his reaction is a normal one." 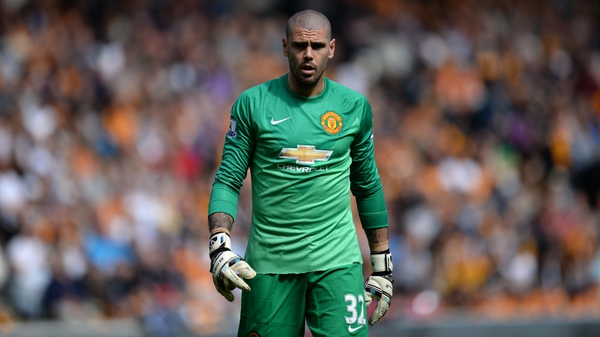