Atletico Madrid dumped holders Barcelona out of the Champions League but the RTÉ football panel had differing view on the methods employed by the underdogs to reach the semi-finals.

A goal in either half from Antoine Griezemann was enough to secure a 3-2 win at the Vicente Calderon as Diego Simeone’s side got the better of their illustrious opponents in a feisty encounter.

Eight yellow cards were dished out and Barca midfielder Andres Iniesta was fortunate to remain on the pitch after conceding a late penalty for deliberate handball.

Speeaking on the RTÉ panel aferwards, John Giles insisted the better team won and it was a victory for team ethic.

“It shows you what a great coach can do with a real team,” he said. “Everyone, when they lost the ball, was obliged to get it back and when they had it used it as best they could. They are not the most gifted lads.”

Liam Brady, however, felt it was a “sad night” for football that football's aristocrats were defeated by such cynical tactics.

Eamon Dunphy argued with his colleague that they are not cynical but hard-working.

“They [Atletico] are aggressive, they are street-fighters. There’s a difference between cynicism and aggression in my view.” 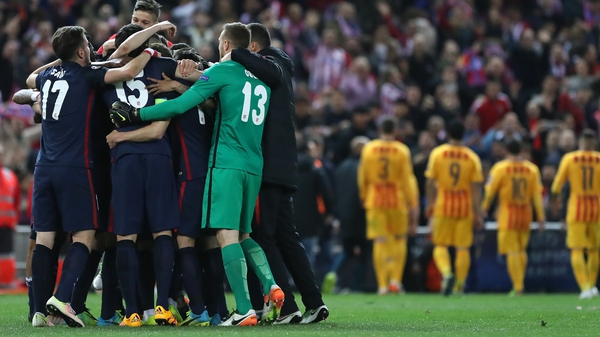