Holders Barcelona are out of the Champions League after Antoine Griezmann's brace sent Atletico Madrid through to semi-finals with a 2-0 quarter-final second-leg victory.

After returning from the Nou Camp with a 2-1 first-leg deficit last week, Griezmann headed home in the 36th minute and then struck a late penalty to give Diego Simone's men a famous 3-2 aggregate win, sending them to the last four of the Champions League for just the second time.

Barcelona, who have now lost three of their last four games in all competitions as their season looks in danger of imploding, piled the pressure on in the final 20 minutes, but were unable to make the breakthrough which would have sent the game to extra time, meaning they bow out of this competition in the last eight to Atletico for the second time in three seasons.

Simone's men made all of the early running and almost enjoyed the perfect start, but Gabi fired just over from the edge of the area.

Despite allowing their visitors to dominate the ball - Barcelona enjoyed 78 per cent possession in the first half - Atletico were never troubled and kept the dangerous trio of Neymar, Lionel Messi and Luis Suarez to scraps.

Their golden moment came nine minutes before the break as they went ahead on the night and in the tie overall by virtue of the goal they scored at the Nou Camp.

Saul was afforded far too much space on the right, but not as much Griezmann, who found himself completely unmarked at the near post and he had no problem in powering home his header from Saul's pin-point cross.

Barcelona's need to score after the break did not immediately change the pattern of the game and only the woodwork denied Atletico doubling their advantage in the 53rd minute.

Barca struggled to clear a corner and Saul jumped highest for a loose ball, with his looping header leaving Marc-Andre ter Stegen stranded only for it to bounce off the crossbar and to safety.

Finally Luis Enrique's side upped the ante and began to camp in the final third, though found chances difficult to come by.

Andres Iniesta curled harmlessly into the hands of Jan Oblak and then Suarez also shot straight at the goalkeeper from 12 yards after expertly rolling his marker.

Atletico were enduring a nail-biting final 10 minutes, but they grabbed a crucial second in the 88th minute.

Filipe Luis galloped clear on the break and his ball to put Griezmann in on goal was cynically intercepted by the hand of Iniesta in the penalty area.

The Frenchman squeezed his spot-kick in to the bottom corner to give Atletico the aggregate lead, though the job was not quite done.

With Barca needing a goal to send it to extra time, Messi whipped a free-kick from the edge of the area - for a handball which occurred inside the 18-yard box - just over as the Catalan side missed out on the Champions League semi-finals for just the third time in 11 years. 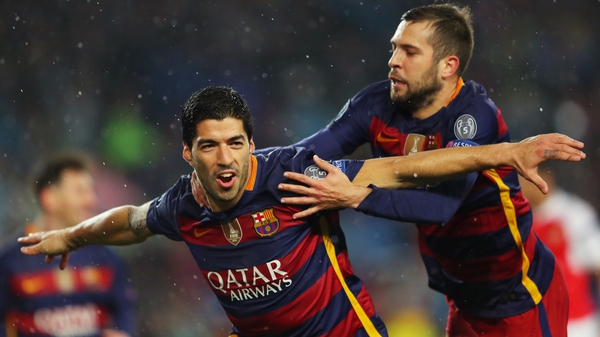