A Leigh Griffiths double gave Celtic a narrow but deserved 2-1 win over Motherwell at Fir Park to strengthen the Hoops' grip on the Ladbrokes Premiership title.

The Parkhead striker missed the target with a penalty in the 26th minute - his fourth failure from the spot this season - as a remarkable display by Well goalkeeper Connor Ripley kept the visitors at bay until Griffiths eventually got the breakthrough just before the interval.

Former Celt Scott McDonald levelled on the hour mark, but Ripley undid all his good earlier work when he allowed Griffiths's shot to slip through his legs for the striker's 37th goal of the season which took Ronny Deila's side eight points clear of Aberdeen going into the split.

Celtic can now prepare for next Sunday's William Hill Scottish Cup semi-final against Rangers at Hampden Park secure in the knowledge that their fifth consecutive title win is all but sealed.

The Steelmen had won 2-1 at Parkhead in December and might have gone ahead in the third minute had Chris Cadden connected properly with Marvin Johnson pass, instead of mis-hitting the ball to Hoops keeper Craig Gordon.

At the other end, Griffiths looped a header from a Mikael Lustig cross on to the top of the netting as Celtic came back, with Ripley making early saves from Stefan Johansen, Patrick Roberts, Nir Bitton and Griffiths. 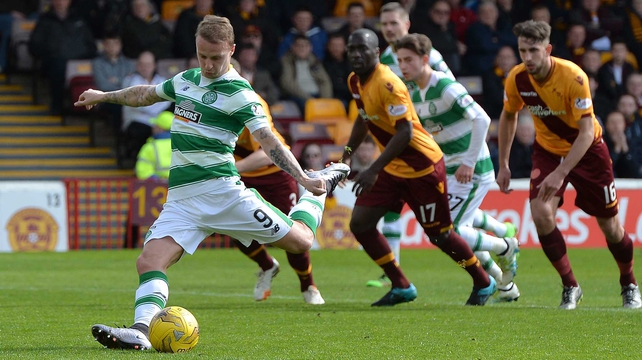 The former Wolves forward had the chance to open the scoring - and end a four-game scoreless run - when Motherwell midfielder Morgaro Gomis tripped the tricky Roberts just inside the area, but he fired the spot-kick wide of Ripley's left-hand post.

Then came another period of activity for the inundated Ripley as he denied Griffiths, striker Colin Kazim-Richards, who had come in for Gary Mackay-Steven, left-back Kieran Tierney and Roberts again.

However, two minutes before the break Griffiths smartly converted a cut-back from Tierney, and his enthusiastic celebrations, a mixture of relief and joy, took him other end of the pitch in front of the bulk of the Celtic support, where picked up a yellow card from referee Willie Collum for taking his shirt off.

Motherwell were more enterprising after the break and in the 54th minute McDonald had the ball in the Hoops net following a pass from Louis Moult, only to see offside flag up.

Ripley saved twice more from Roberts, but the game turned when, from 12 yards, MacDonald drilled in a cut-back from Cadden.

This time the goal stood and it knocked Deila's side out of their stride.

However, in the 74th minute Celtic's lead was restored by Griffiths, who scored again from a Tierney cut-back, although this time Ripley was culpable, allowing the shot to slip through his legs and over the line, to the dismay of the Motherwell faithful.

The visitors finished the game in control - Ripley denied Griffiths a hat-trick after the Celtic striker had robbed Kieran Kennedy - and will start looking towards Hampden Park next week where more drama is certain. 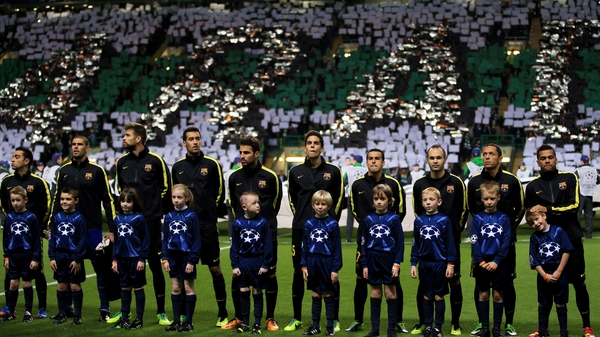 Barcelona and Celtic to play in Dublin