Bayern Munich will take a slender 1-0 lead to Portugal after an organised defensive display from Benfica at the Allianz Arena in the Champions League quarter-final first leg.

Arturo Vidal's second-minute goal was all that separated the two teams on an evening when Bayern were unusually subdued for long periods and struggled to break down their opponents, who grew into the game as it went on.

Pep Guardiola hailed Benfica's defensive unit as Europe's best in the build up to the game. While that was not evident early on as Bayern scored with their first attack, the claim held water for much of the contest as the likes of Thomas Muller, Franck Ribery, Robert Lewandowski and Douglas Costa were largely kept quiet.

The visitors will be disappointed with the goal they conceded, though.

One switch of play caught out the entire Benfica back line and after Ribery and Lewandowski exchanged passes, Juan Bernat curled in a cross and Vidal had timed his run into the box perfectly to head past Ederson.

Another diagonal pass after 10 minutes almost had them in trouble again as Eliseu Pereira was left exposed against Douglas but Ederson did well to smother and hold the low shot from his fellow Brazilian with Lewandowski lurking for any rebound.

Ederson then kept out a Lewandowski volley as Bayern threatened to add a second goal.

At the other end, Benfica asked for a penalty when Nicolas Gaitan's low cross struck the trailing arm of Philipp Lahm as he slid in to make a block but Polish referee Szymon Marciniak was unmoved.

Ederson's alertness thwarted the hosts once more just after the half-hour mark following a clever free-kick from Thiago Alcantara, whose deft flick over the defensive wall would have dropped nicely for Muller to shoot had the goalkeeper not rushed to the edge of his six-yard box to smother the ball at the German's feet.

Vidal mis-timed a header when in a good position as another chance came and went for Guardiola's team but the former Juventus midfielder made amends in his own penalty area in first-half stoppage-time, sliding in to block a goalbound effort from Gaitan.

Benfica went close again shortly after half-time when top scorer Jonas Oliveira, with 32 goals this season in all competitions, spun away from David Alaba inside the penalty area but hit his shot straight at Manuel Neuer when faced with the Bayern keeper.

The Portuguese had their tails up and it took a block from substitute Javi Martinez just in front of his own goal line to preserve Bayern's lead as Jonas' goalbound shot struck his chest. The Brazilian then snatched at the rebound and sliced the ball high and wide on the volley.

Ederson was not worked again until the 80th minute, repelling a Ribery effort with his foot following a direct run goalwards from the pacey forward.

Lewandowski had few sights of goal and his header from Muller's corner was over the crossbar. The Poland international then spurned a glorious chance to make it 2-0, rejecting the opportunity to shoot from Vidal's through ball and instead over-hitting his attempt to tee-up Lahm with the goal gaping.

It was a massive let off for Benfica who will be much the happier of the two sides ahead of the return leg at the Estadio da Luz next week. 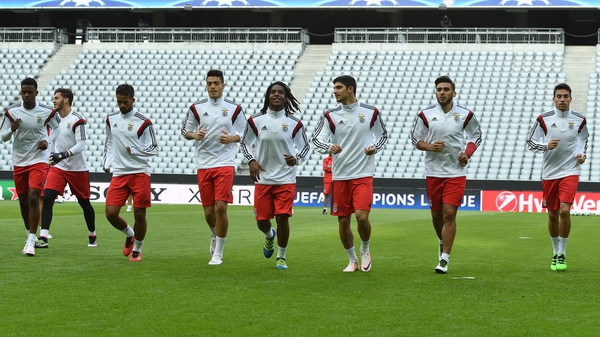